Friends and colleagues of the prominent Māori leader Te Awanuiārangi Black have spoken of their shock and grief over his widow's accusations that he was a paedophile.

In an extraordinary live video, a distraught Anihera Black said her late husband had been abused as a child and had gone on to be a predator himself.

She encouraged any of his victims to come forward and speak.

"Those good deeds Awa did for individuals will live on in the memory of their lifetimes. However the pain and suffering he caused others may live on for generations to come if things are left unsaid."

Mrs Black sat at the top of Mount Maunganui as she struggled through the statement she said is from her and her kids.

"The man who I thought had mana and dignity, was loyal, generous, kind, faithful, had integrity. That was not who he was behind his clay mask.

Mr Black was a regional councillor and Māori Party candidate. He died from organ failure after a short time in hospital in 2016.

Mr Black's former colleague at the Bay of Plenty Regional Council, Arapeta Tahana, said he watched the video with his partner. 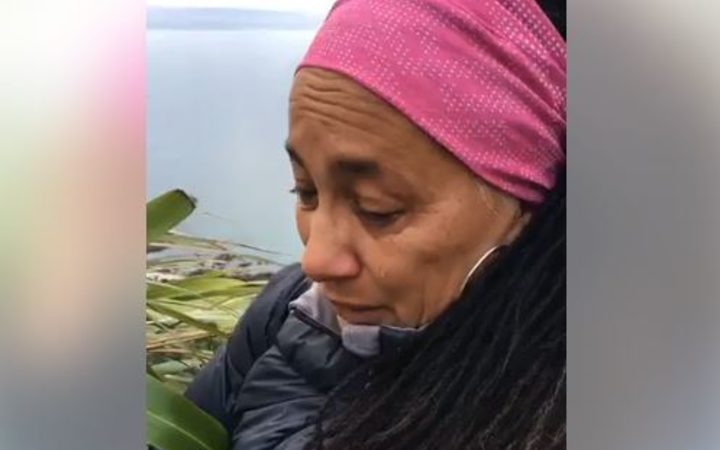 In an extraordinary live video, a distraught Anihera Black said her late husband had been abused as a child and had gone on to be a predator himself. Photo: Facebook

"We were very much surprised, in fact in disbelief. It just really didn't align with the person that we knew and our experiences of him.

"We found him a really loving man, who cared about his community, cared about people, and we had quite a close relationship with him."

He said they helped each other through a lot.

"In the last year or so we became quite close personal friends. He'd been quite helpful for me in terms of dealing with some depression and some challenges I was having and I'd like to think likewise me with him.

"In those final six months he was in quite a sad place."

Mr Black also twice ran as a candidate for the Māori Party.

Former co-leader Te Ururoa Flavell says he had known Mr Black a long time, and felt a range of emotions seeing the video.

"Pretty shocked, taken aback, sad, angry. Felt sorry for Ani and the family. But also concerned around the accusations and hope they will be taken to the police so they can investigate."

He said he had spoken to a number of people in the community who he and Mr Black both knew well, and they were all in a state of shock at the accusations.

"Sure there's some issues within whānau, that happens all the time. But in respect to issues of paedophilia and child rings and so on - that takes it to another level. Not one person I've spoken to can verify that."

But Mr Flavell wants the police to investigate so either Mr Black's name can be cleared, or the truth can be found out.

Police have released a statement saying they were aware of the video, and would be seeking further information about the allegations.

Labour's MP based in the East Coast, Kiri Allan, said this was going to have an impact on people in many different ways.

"I don't think this is the right time to take sides, so to speak. But to say that when somebody who feels powerless, takes their power and stands up to speak when she sees an injustice... we as a community need to wrap around her.

"I think it's important to acknowledge the courage that she's shown."