Prince Louis, the youngest son of the Duke and Duchess of Cambridge, has been christened in a private ceremony. 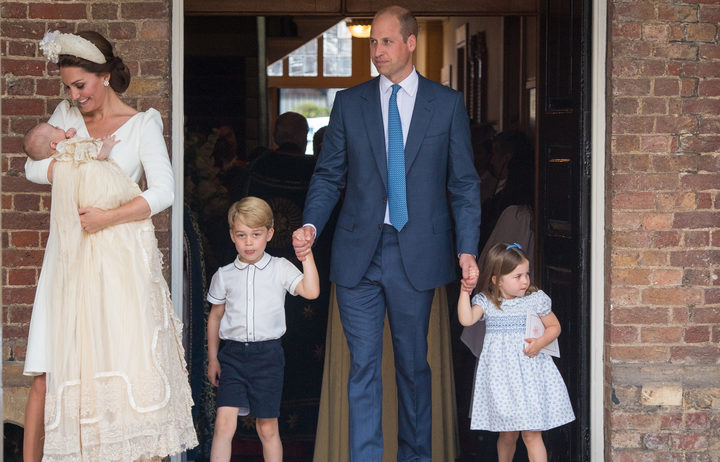 The 11-week-old was baptised by the Archbishop of Canterbury, the Most Reverend Justin Welby, in the Chapel Royal at St James's Palace.

Guests included newlyweds the Duke and Duchess of Sussex.

But the Queen and Duke of Edinburgh did not attend, with the decision made "some time ago" and not on health grounds, Buckingham Palace said.

The Queen, 92, was travelling back from Norfolk on Monday and has a busy week ahead, with celebrations marking the centenary of the RAF on Tuesday and US President Donald Trump's visit to Windsor on Friday.

Prince Louis was sleeping as he arrived at the ceremony, held by his mother. 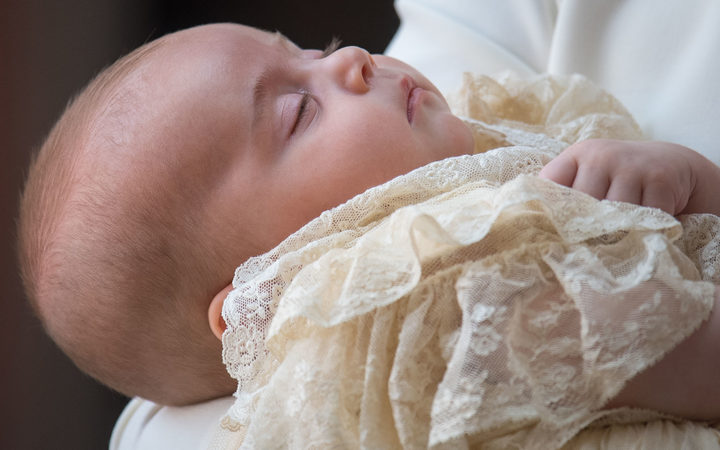 Prince Louis has been christened in a private ceremony. Photo: AFP

It is the first time the Duke and Duchess of Cambridge and their three children have been seen together as a family of five.

She was heard describing her son as "very relaxed and peaceful", telling the archbishop with a smile: "I hope he stays like this."

They are all friends or family of the Cambridges, who also picked friends and confidantes as Prince George's and Princess Charlotte's godparents.

Miss Middleton and Mr Pelly each read a lesson during the service, Kensington Palace said. 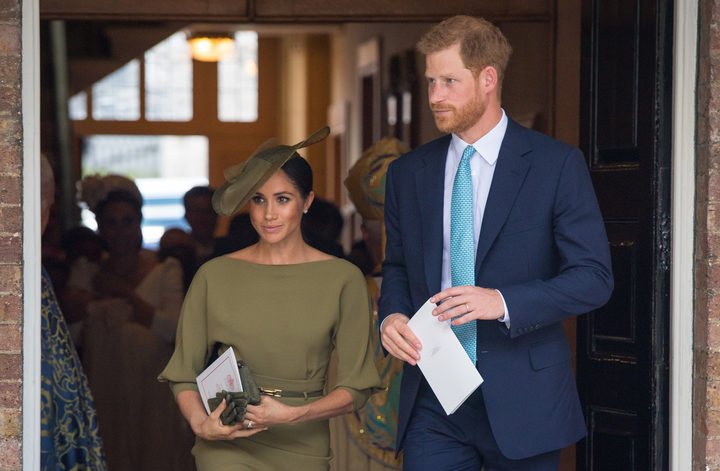 Louis's grandfather the Prince of Wales attended with the Duchess of Cornwall, with Kate's parents Carole and Michael Middleton also among the guests. 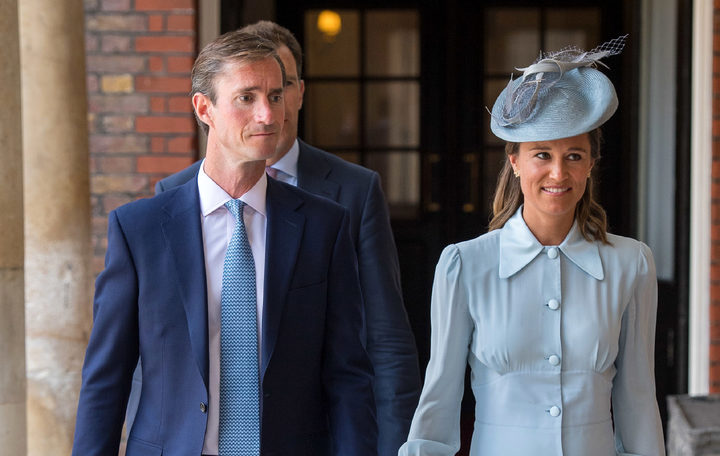 Kate's pregnant sister Pippa Middleton and her brother James Middleton were also at the ceremony.

The Duke and Duchess of Cambridge chose hymns O Jesus, I Have Promised and Lord of All Hopefulness for the ceremony.

They also chose two anthems for the choir to sing - This is the Day which the Lord hath Made, written for their wedding in 2011 by John Rutter, and Suo Gan, a traditional Welsh lullaby. 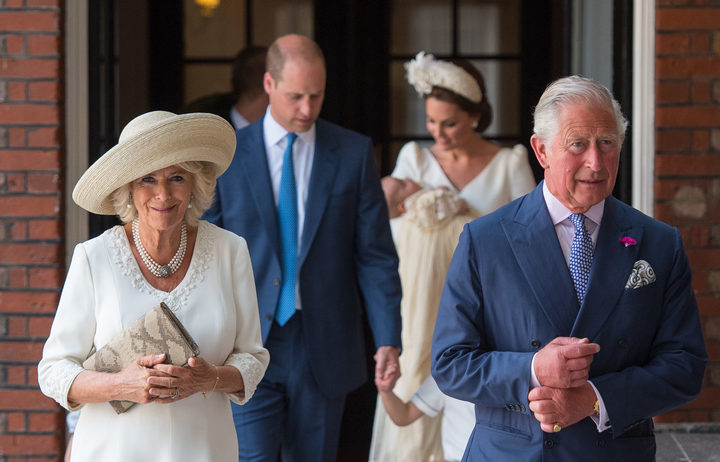 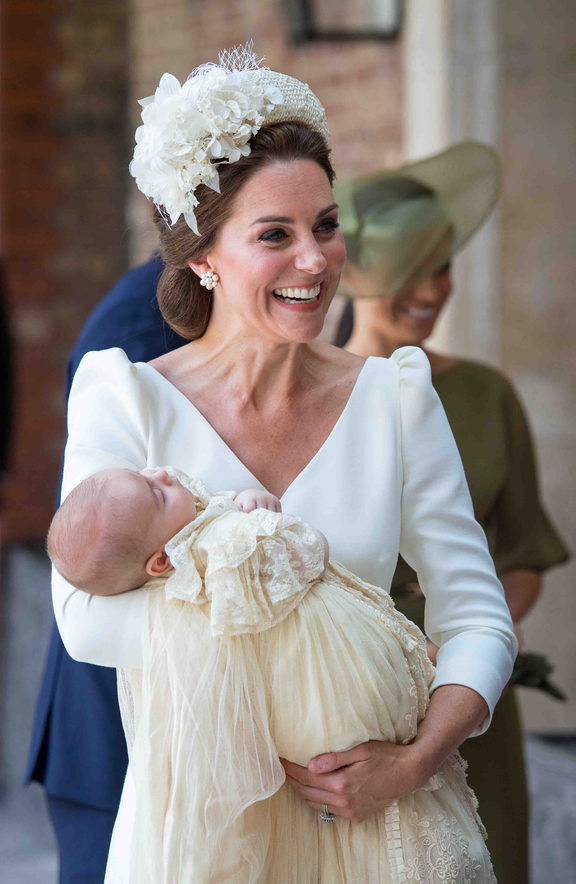 Prince Louis's christening gown is the same one that was used by his siblings.

The cream lace and white satin robe is a replica of the robe made for Queen Victoria's eldest daughter in 1841, which is now too delicate to be worn. The new version was made by the Queen's dresser, Angela Kelly.

According to tradition, water from the River Jordan was used at the christening.

Following the 40-minute traditional religious service, guests attended a private tea which included slices of christening cake, from a tier taken from the duke and duchess' wedding cake.

Louis Arthur Charles was born in the private Lindo Wing of St Mary's Hospital in Paddington, London, on 23 April. He is fifth in line to the throne.

His elder brother George was also christened at the Chapel Royal, but sister Charlotte's christening was at the Church of St Mary Magdalene in Sandringham.

Who are Prince Louis' godparents?

Guy Pelly: The son of wealthy Kent landowners, Mr Pelly used to help run several London nightclubs. He is a close friend of both Prince William and Prince Harry - helping to organise the former's stag do - and was dubbed the pair's "court jester". He has been banned from driving three times, including twice for drink-driving and once for speeding.

Nicholas van Cutsem: He is a British Army major and a close friend of both Prince William and Harry. His daughter, Florence, was a bridesmaid at the Duke and Duchess of Sussex's royal wedding in May.

Lady Laura Meade: Also one of Princess Charlotte's godparents, Lady Meade is the wife of Prince William's close friend and fellow Etonian James Meade, known as "Meadey". She is the daughter of the 8th Earl of Romney.

Hannah Carter: Formerly Hannah Gillingham, she went to school with Kate at Marlborough College. She is the wife of Robert Carter, who belongs to a family of wealthy landowners.

Lucy Middleton: She is the Duchess of Cambridge's cousin and a solicitor.

Harry Aubrey-Fletcher: He went to Ludgrove School and Eton with William and his father is the Lord Lieutenant of Buckinghamshire.