The woman who led hundreds of students in a march to law firm Russell McVeagh's Wellington office earlier this year hopes a high-level review paves the way for change. 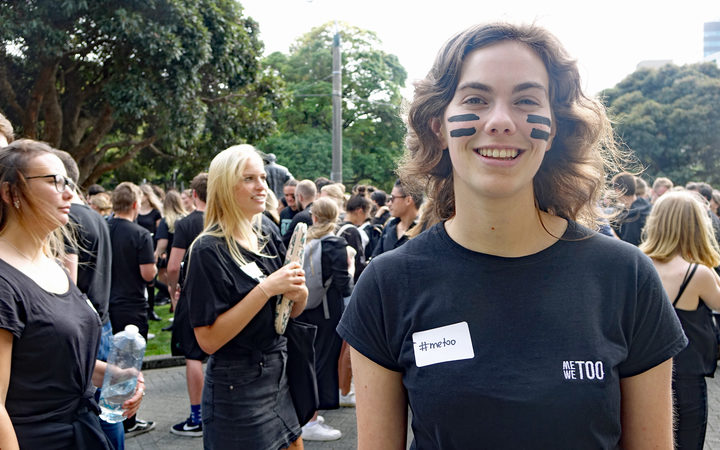 Bethany Paterson, who was a law student at Victoria University, led hundreds of students in protest against the government's use of Russell McVeagh. Photo: RNZ / Katie Scotcher

Part of the Wellington office was "out of control" and one staffer described finding out about the extent of past sexual misconduct at the firm as being "like a bomb had gone off in the office".

Victoria University law student Bethany Paterson said it was a relief to read the 89-page report into the culture at Russell McVeagh.

Ms Paterson said a lot had changed since she led the march earlier this year.

"I remember before the march feeling really afraid of saying anything in that it might jeopardise my law career and other people's law careers - I know a lot of other students were afraid of marching, and I think a lot of those fears are lessened now," Ms Paterson said.

"There's been a lot of dialogue about it since we had our march and I think the space has really opened up for people to speak on these issues."

The firm hit the headlines in February after revelations that summer clerks, from Paterson's university, had been reported being sexually assaulted at the firm two years ago.

Shortly after, an external review was requested. The results of that were released yesterday.

Dame Margaret found the first allegations arose from a Christmas party in Wellington in late 2015.

Four female university students told her they were groped and kissed by a male partner in the firm.

They felt intimidated, confused and uncomfortable - and at the time, they were not aware of what had happened to each other.

Dame Margaret found they were poorly managed and had serious consequences for those involved.

"The young people who were involved in these disgraceful incidents and who have had the courage to speak out have been a catalyst for change for Russell McVeagh and the wider legal profession," Dame Margaret said.

"It's my hope that the changes proposed will ensure that future generations of young lawyers will be safe and able to realise their full potential."

All six of the country's university law schools temporarily cut ties with the firm following the revelations earlier this year.

But next month, law deans from across the country will meet Russell McVeagh representatives to determine their future relationship with the firm.

Victoria University Vice Chancellor Grant Guilford said the report was a step in the right direction.

"With the honesty of the report, with the willingness to accept all of the recommendations here and of course what we will be looking for, as we begin to restart that relationship and develop it into the future, is that these recommendations are adhered too and are actually implemented," he said.

Once news broke, the government's use of the firm was questioned.

Justice Minister Andrew Little was asked if the government would cut ties with the firm now the review had been released.

"The issue is to sort out behaviour and conduct and a culture within this professional services firm that is totally unacceptable," Mr Little said.

"You've actually got to change behaviour - I'm not sure that the government finding other law firms to instruct or brief out their work to is going to be an answer to the problem," he said.

Mr Little said the sexual misconduct at Russell McVeagh put the entire law profession on notice, and he would look closely at Dame Margaret's recommendations.

As justice minister his specific interest was in the Law Society and whether it had the right powers and capability to respond to claims of wrongful conduct towards employees of law firms. He said there needed to be a place where such employees can go when they need help, and it may not necessarily be the Law Society.

Law Society president Kathryn Beck said the behaviour revealed at Russell McVeagh was also an issue for other firms.

"A lot of the issues that Dame Margaret has raised in relation to the culture and structure at Russell McVeagh is consistent with the issues that came out of our own survey ... in terms of sexual harassment in the workplace, the prevalence of bullying - but also excessive workload and stress."

A working group led by Dame Silvia Cartwright is looking at whether the Law Society is a safe place for complainants to come to, and whether it can take effective action.

Dame Margaret's recommendations include an anti-bullying policy, a confidential mechanism for reporting misconduct, continuing efforts to achieve gender equality and progress reporting to the Law Society.

Russell McVeagh has accepted all of six pages of recommendations.