Hundreds of university students, lawyers and academics have marched through Wellington, asking for under-fire law firm Russell McVeagh to be suspended from all government contracts. 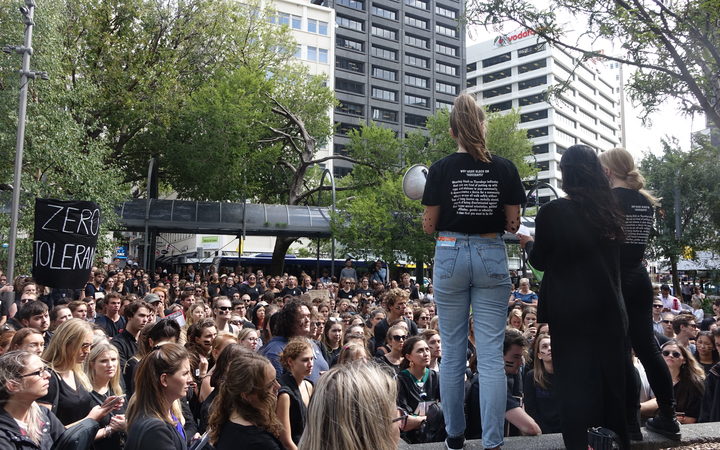 Academics and lawyers joined hundreds of students at the protest in Wellington Photo: RNZ / Katie Scotcher

Russell McVeagh is in the spotlight over serious sexual misconduct complaints levelled at two senior lawyers at its Wellington office two years ago, and separate revelations of alcohol-fuelled sex in a boardroom.

The firm has asked Dame Margaret Bazley to head an extrernal review of the allegations, and the firm's response.

Hundreds of students dressed in black, waved banners, and chanted as they marched to Russell McVeagh's Wellington office.

They were protesting against sexual harassment and violence towards students, interns and graduates in the legal profession, which law student Bethany Paterson said has been going on for far too long.

"You hear about these kinds of things all the time at law school and I think there's been a lot of tension bubbling under the surface and people have wanted to speak up about it," she said.

"But until something comes up in the public, you can't talk about it unless it's your story.

"Now I feel like we have an opportunity to say that we want the culture to change," she said. 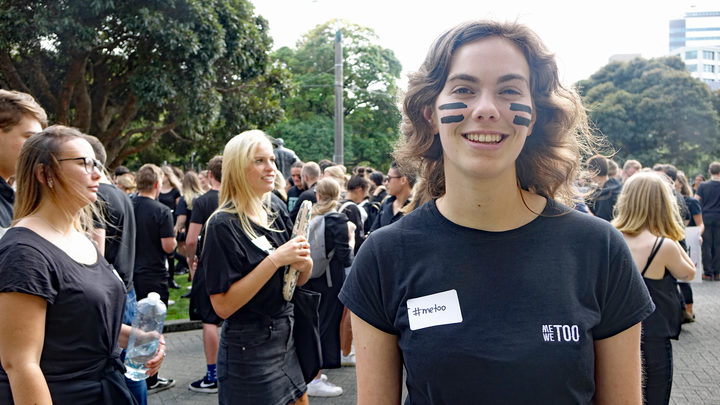 Victoria University student leaders presented a list of demands - including calling for the government to suspend all Russell McVeagh's public contracts until their external review is completed, and for all legal firms to improve the way they deal with sexual assault and harassment.

"The to-do list has clear objectives that law firms and others can take to eliminate sexual harm and sexual violence in our community.

"Every aspect of sexual harassment and sexual violence is preventable," she said.

In the past month, all six of the country's law schools have cut ties with Russell McVeagh - a point Victoria University's Vice Chancellor Grant Guilford reiterated in a speech before the march.

The march clearly showed the university would not stand for sexual harassment, he said.

"People are abusing their power, they're not taking any responsibility, they're not showing empathy or compassion for the victims of these assaults," he said.

"I think they underestimated the impact it has, just sort of marganalised it as some sort of innocent behaviour when in fact it's very, very damaging.

"So, we've got to get out there, make a statement that matters and getting out on the street is one way of doing that."

Earlier today, Women on Boards - a group promoting diversity in boardrooms - cancelled the firm's sponsorship of a major prize-giving.

Russell McVeagh's management said it would not be commenting until its external review was completed.

The Law Society has formed a working group to improve reporting of sexual harassment in the legal profession.

Justice Minister Andrew Little has said he would consider a ministerial inquiry if the society's work to fix sexual harassment and misconduct in the profession was not up to scratch.