Owners of cars under two years old are being warned to check their tyres more frequently after authorities confirmed more cars than ever are on the road with unsafe tyres- due to extended warrant of fitness regulations. 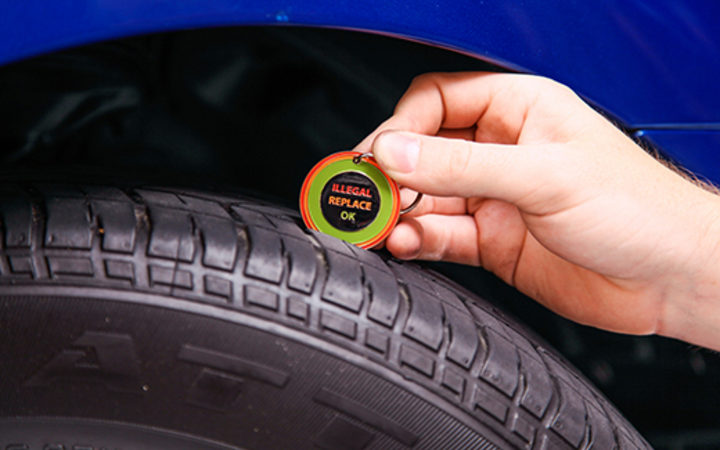 Hutt City Council parking services manager Barry Rippon said over the last 12 months the number of car tyres he had seen with the canvas showing has doubled.

"We previously identified about 25 a month, but in the last 12 to 18 months we've been writing tickets at a rate of about 55 a month," he said.

"The tyres that we're reporting on are not just insufficient tread depth - it's because the canvas is actually showing. Anybody that drives a motor vehicle should be able to tell the difference. These vehicles come to our notice because nobody else has bothered to look at them, basically."

He said more tyres being worn down was probably to do with warrant of fitness (WOF) regulations being extended.

"Cars after 2000 only need a warrant every one year and newer vehicles every three years, and vehicle tyres can deteriorate quite rapidly in that time."

"If a tyre that's worn down to the canvas bursts and you're on the motorway at 100 kilometres the car will very quickly disappear to the left or the right side of the road and the ability for the driver to get control of the vehicle is pretty slim actually."

Mr Rippon said Hutt City Council wardens issued infringement fines for tyres showing the canvas and put an educational flyer on the windscreen if a tyre was close to being worn down.

"Some people are under the impression that parking wardens aren't qualified to make those calls but quite simply if a tyre is worn so badly the canvas is showing through, anyone can see that's obviously not right."

AA Motoring Services general manager Stella Stocks said it had also noticed cars with tyres more worn-down than before coming in for WOF checks and said the issue was nationwide.

"It probably is tied to when the warrant of fitness was changed."

Ms Stocks said although newer cars needed a WOF every three years, tyres should still be checked once a year and tyre air pressure should be checked monthly.

But, she said parking wardens issuing fines for unsafe tyres was "dangerous ground".

"The tyre needs to be checked properly before it's an infringement - you need people who can actually verify that the tyre is dangerous, rather than add it to a parking warden's duties."

Ms Stocks said New Zealand Transport Agency (NZTA) was responsible for changing the WOF regulations and should have done a better job of educating motorists about the consequences of the change.

"The NZTA, when the warrant of fitness changes were made, did make a commitment to put some training and education out for the public and they did do some but I think it needs to be constant to get the message through."

"Our cars are a lot more reliable than they were 20 years ago and I think one of the unintended consequences of that is we don't look at our cars so much as maintenance," he said.

"Greater awareness is something that definitely needs to be done."

In a statement NZTA said it encouraged people to regularly check their tyres and not to wait until the tread depth reached the legal minimum before replacing them.

"We run a targeted education and advertising campaign which encourages people to regularly check their tyres and other key safety features to ensure that their vehicles are in a roadworthy condition at all times."