It will take up to a year for the forestry industry to find a solution to the amount of wood left over in Gisborne blocks, the Forestry Owners Association says. 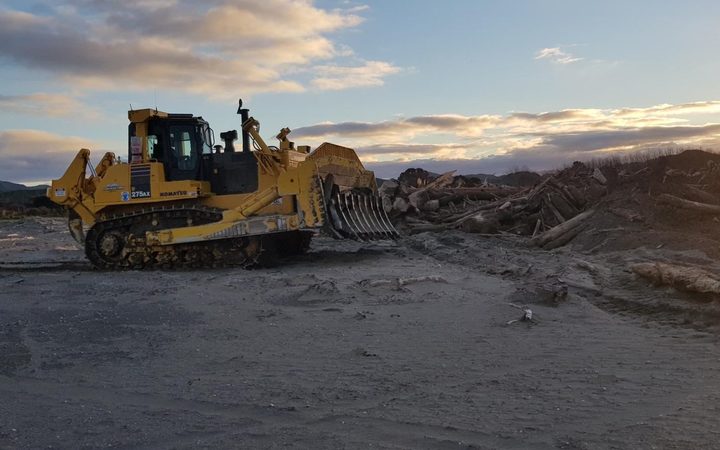 The Forestry Owners Association (FOA) says it will take up to a year for the industry to find a solution to the amount of wood leftover in Gisborne blocks after flooding in Tolaga Bay in June 2018. Photo: Supplied / Peter Weir

Heavy rain and flooding in Tolaga Bay this month left tonnes of forestry debris strewn across farms and blocking rivers.

The clean-up is expected to cost about $10 million, with the government providing some support.

With affected farmers seeking redress through the courts, some have also been looking to the future and trying to find a solution to the problem of slash - wood debris generated by forestry and left sitting on the land.

FOA president Peter Weir said part of the problem was most Gisborne forestry blocks were too far from plants that could process leftover wood.

"That's a bigger conversation that'll take a year or so. If there were markets for this stuff, there would be no wood left on the hill.

"If there was a pulp mill or medium-density fibre plant, people would take it and sell that stuff to it.

"Maybe at break-even cost or maybe even losing ten dollars a tonne, but it would be gone and places where the facilities exist, there is no slash left on the hills," Mr Weir said.

The priority work now would be cleaning up the streams within the forests and rebuilding slash traps that stop debris going into streams, a number of which were destroyed in the storm.

Forestry owners have been encouraged to build larger traps or second traps to mitigate for big storms in the future, which Mr Weir said are only set to increase as climate change takes effect.

The FOA will release a set of revised guidelines for slash management in the next few weeks.

Changes to the Resource Management Act introduced in May give the district council power to decide what is planted, and when, in forestry blocks at a high-risk of erosion and slippage.

Over half of these "red-zone" forestry blocks are in the Gisborne area, Mr Weir said.

Most of the clean-up had been completed with local forestry companies helping locals to clean up debris from beaches, fix fences and remove silt, Mr Weir said after his visit to the town yesterday.

The association has left it up to the three local forestry companies to conduct their own individual investigations into the slash that washed into the Gisborne community of Tolaga Bay on Queen's Birthday.