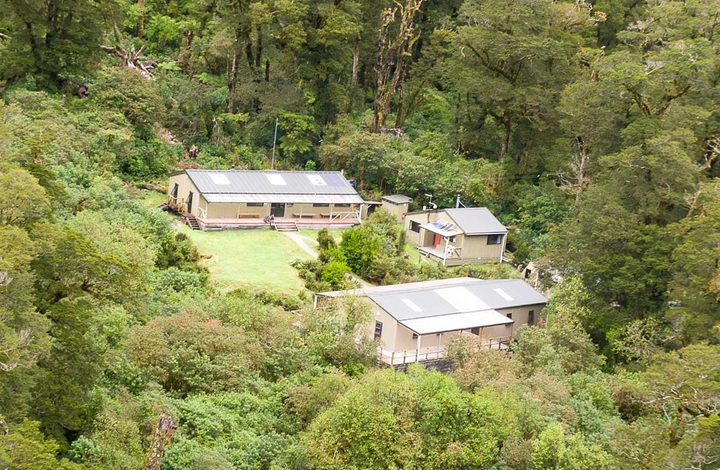 The Department of Conservation said hut bookings on the Milford Track over Christmas sold out within 15 minutes on Tuesday.

The rush on bookings has left at least one New Zealand tramper out in the cold.

Nelson teacher and tourism accommodation provider Roger Waddell said reservations for the three huts showed up fully booked every night from 17 December until the few days after Christmas, straight after they went online.

"So at 9.30am on Tuesday my 20-year-old daughter was poised over the bookings. She was logged in, ready to go and the screen showed the bookings were either not opened, or they had been opened and had already been booked."

Daughter Briar Smith-Waddell said it was their pick of all Great Walks, aimed at celebrating her graduation from the University of Otago where she is about to complete a degree in neuroscience.

"We were going to do the Milford about two days after I graduate, on the 17th of December and it was the only time we wanted to do it," she said.

Mr Waddell wondered if the site was malfunctioning, if it was overcrowded or something else.

"The conspiracy theorist in me wonders if there was some other system where people had some sort of ability to book earlier."

Mr Waddell said there must have been thousands of people all booking at once.

"And maybe it was just the luck of the draw whether you got within a microsecond.

"We are talking literally a second to two seconds within the time the bookings became available that they then disappeared, so I find that intriguing," he said. 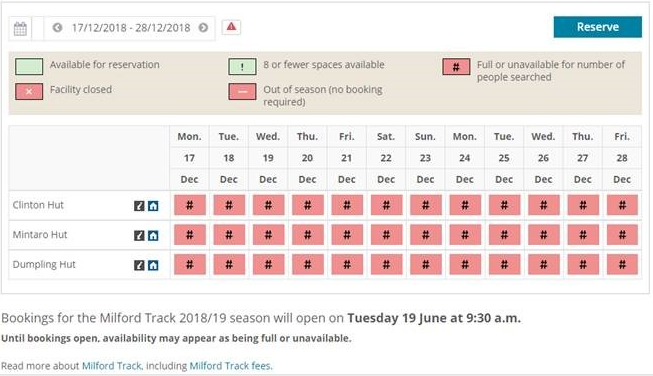 DOC's hut bookings for the Milford Track as it looked seconds after opening on Tuesday. Photo: Supplied.

The Department of Conservation said new, more efficient software created to help with hut bookings had no doubt contributed to the frustrations some were experiencing in missing out.

Department booking service spokesman Ross Shearer said that last year it might have taken an hour for key dates to fill up, but this year they had filled up within minutes.

"We did about 1150 bookings in the first 15 minutes of opening. They were mainly for the summer holidays but there are still dates available on the Milford outside these key dates," he said.

Earlier this month the government announced hut fees for overseas tourists on the Great Walks would double this season.

They will have to pay $140 a night for a bed in a DOC hut on the Milford Track, and $130 per night on the Kepler and Routeburn Tracks.

Mr Shearer said a rough breakdown showed about 63 percent of bookings were made by New Zealanders and the rest from overseas.

He said the system did not allow for block bookings.

"No one has a concession, especially for the Milford. There are companies that have their own accommodation and do their own tours.

"No one has any advantage over other customers. We sympathise with those who've missed out but the Milford, in particular, is a really popular Great Walk. We've made a conscious decision to protect the environment by limiting the numbers on it to 40 people per night in each hut.

"We don't want to put a 100-bunk hut on the Milford and spoil the experience," Mr Shearer said.

Mr Waddell said it was to be his and his daughter's first trip to the Milford and they were bitterly disappointed and were now looking at alternatives.

"I think we're just planning on doing another tramp but it won't be one of the Great Walks. We could do the Routeburn but I'm not sure if it's sold out yet."

DOC said there were still spaces available in other huts on the Great Walks.