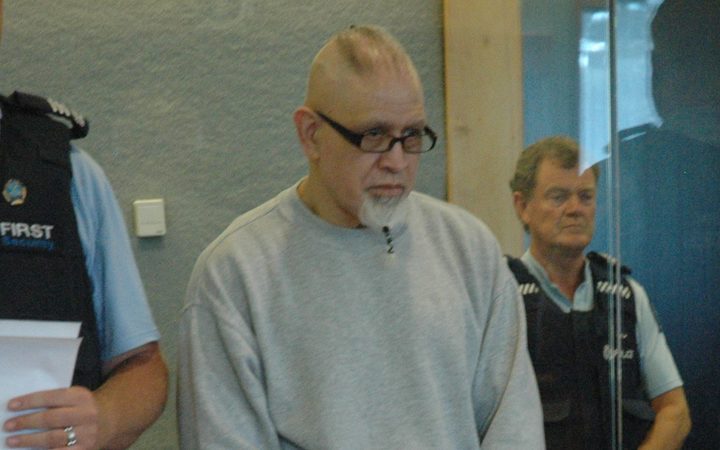 Malcolm Rewa in the dock at the High Court in Auckland in December 2017. Photo: RNZ / Edward Gay

Rewa is serving preventive detention with a minimum non-parole period of 22 years for rape and other offending against 25 women.

He now faces a third trial for the murder of Susan Burdett who was found raped and bludgeoned to death in her South Auckland home in 1992.

Rewa's lawyer, Paul Chambers, has previously said his client cannot get a fair trial because of media publicity about his client.

He is now seeking a permanent stay in proceedings that, if successful, would bring an end to the case.

Justice Woolford set the argument down for July.

Rewa's DNA was found at the scene, but two juries failed to reach a unanimous verdict on the murder charge.

The Attorney General issued a stay 20 years ago, meaning no further prosecution of Rewa would go ahead.

But after Teina Pora's convictions were quashed by the Privy Council, attorney general David Parker effectively lifted the stay.

Justice Venning ruled there was no procedural bar to lifting a stay. He found that while the decision to lift a stay could be reviewed by the court, he declined to review this particular decision.

Pora's convictions for Ms Burdett's murder were quashed by the Privy Council in 2015. He was convicted after a false confession.

The judgement also provided insight into the Solicitor General Una Jagose's reasons to try Rewa for a third time and were set out in full in Justice Venning's decision.

Ms Jagose said after Mr Pora's convictions were quashed, no one had been held accountable for the murder and there was sufficient evidence to support the murder charge against Rewa. There was also public interest in the case.

Justice Venning said although third trials were rare, they had happened before.

Rewa's case will come back to the High Court next month where Rewa's lawyer is expected to notify the court on whether there are any other pre-trial issues. That could include an application to dismiss the prosecution.

A trial has been set down for eight weeks, beginning in February next year.