District health boards are offering nurses pay rises of 9 percent over the next 15 months in a bid to avoid nationwide strikes.

DHBs have been in pay talks for months with nurses who say they're being overworked and underpaid. 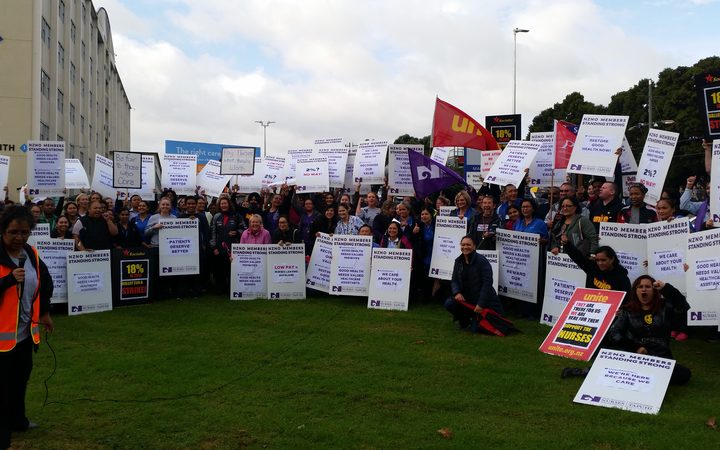 The announcement by DHBs was made after the New Zealand Nurses Organisation (NZNO) voted in favour of nationwide strikes over pay and staffing concerns and said its members had agreed to stop working for 24 hours on 5 July and 13 July, if necessary.

The pay offer was part of a $520 million package, and included a $2000 one-off payment plus $48 million to increase staffing levels.

Salary limits would also increase for registered nurses with more than five years' experience, translating to rises of about 16 percent for some staff.

Earlier today NZNO spokesperson Cee Payne said its members wanted immediate increases of at least 11 percent to avert strike action this winter but members were expected to vote on the new offer in June.

"If this offer comes back and it's good enough, and our bargaining team reckons take it out to members … if majority of members were to vote yes to that offer then, yes, the strike action would not happen," Ms Payne said.

The only time nurses, midwives and healthcare care assistants mounted a national strike was nearly 30 years ago, Ms Payne said.

"It's been close to 30 years since our members have ever taken a vote for national industrial action, and it just shows you the strength of concern that that's where they are right now today."

Members had been very disappointed with the previous pay offer from the panel, she said.

"We need about 11 percent right now to be back with secondary teachers on pay parity."

DHBs believed the recommendations made by an independent panel around pay were fair and reasonable, and the agreement the DHB had drawn up went further than what was suggested, spokesperson Helen Mason said.

Over the term of the agreement there was an increase of $250 million compared to the previous offer, she said.

"Our nurses are highly valued ... as part of our workforce - that's why DHBS have worked so hard to come up with an offer which we believe is significantly improved and is a very, very reasonable offer."

"I'm really optimistic that it will mean no strike action. It's a long time since we've had a national strike [and] we've really strongly heard nurses' concerns."

A registered nurse with five years' experience would see an increase in their pay packet of $200 a week over the term of the agreement, Ms Mason said.

An independent panel last week recommended nurses pay be increased 9 percent by next August - starting with a 3 percent rise in June, another one in August and a third next year - as well as a one-off payment of $2000.

The panel also recommended a 2 percent increase in nurse staffing numbers, which is estimated to be an additional 600 full-time equivalent positions around the country.