A clampdown on semi-trailer trucks is looming but only after years of warnings and at least 10 big units suffering faulty or broken connections that could have caused a crash. 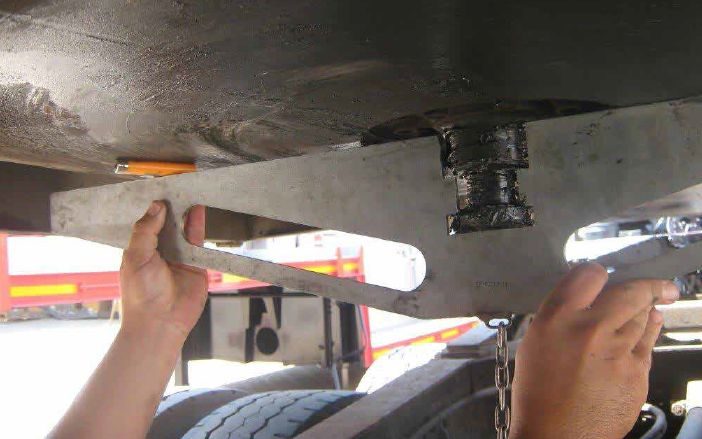 The Transport Agency planned to bring in a mandatory inspection regime later this year for all semi-trailers' skid plates.

The plates are where the trailer and truck-cab connect, with a kingpin holding the two together.

However, documents newly released to RNZ under the Official Information Act show the trucking industry has been concerned for years, and worried about the rules being relaxed.

"Since the requirement for kingpin crack testing at 100,000km was removed, there is no regular inspection or measurement of kingpins by testing stations. This has gone from the sublime to the ridiculous," notes from an industry working group in late 2015 said.

The OIA documents also showed alarm within the Transport Agency over the design of some semi-trailers.

The agency warned this was a safety issue for other motorists, because heavy-weight trailers might break loose and hit them.

It put out a safety alert three months ago about 1000 refrigerated semi-trailers.

The concerns have included widespread problems with corrosion in skid plates of refrigerated fibreglass-bodied trailers, but are focused on semi-trailers manufactured by Australian-owned MaxiTrans.

The OIA gives the registration numbers of these semi-trailers but not the dates or details of how they failed.

These 10 do not include the December 2017 failure or cracks in "several" trailers, including of other makes, that have been found.

The OIA response revealed Halls Transport in Auckland in March last year raised concerns about the design and safety of the semi-trailers with MaxiTrans.

MaxiTrans said it had its own concerns for safety given the "high number of failures on these units" which were used by several companies around New Zealand, including some with special permits to operate extra-long and heavy trucks.

"Several operators operate these units and may not be aware of the skid plate failures which they have had in their fleet," a report said.

The Transport Agency put out extra safety advice in 2015. However, an industry plan to involve engineers in developing better inspection procedures and new trailer design criteria did not happen.

The emails released under the OIA show that by mid-2017, Transport Agency chief adviser of certifications Jim McDonald was upset.

"Once again the review process is being used wrongly to correct issues such as this," Mr McDonald emailed other agency managers.

"If we have evidence/statements then the agency should take action - if this is as serious as it is being made out to be then these vehicles need recalling urgently and MaxiTrans certifiers need to be held accountable via the complaints process."

In the exchange, an experienced agency engineer John Long emailed: "There is a long history of MaxiTrans skid plates failing prematurely ... it is my opinion, and that of other certifiers, that the MaxiTrans semi-trailer design defies sound engineering practice."

Principal engineer for heavy vehicles Don Hutchinson emailed: "Some kingpins that where certified managed to leave the factory with only tack welds and some front ends of semi-trailers are breaking up quite early in life."

There has not been any recall.

Instead, seven months after this, in February 2018, the agency put out the safety alert.

The alert urged truck drivers to do extra daily checks even though it noted that a lot of the rust or cracking was hidden, and only a full certification check could reveal it.

"All skid plates fitted on MaxiTrans trailers at the time of manufacture, regardless of year, have been compliant with the relevant industry standards," it said.

However, MaxiTrans had changed its manufacturing processes since 2013 to use continuous welding, which gave trailers a longer lifespan.

There was no mention made by either MaxiTrans or the Transport Agency of the other main problem: A design that lets water sit in the plate, causing rust.

MaxiTrans was getting in touch with owners of 301 semi-trailers made between May 2011 and March 2013, to help get them inspected.

The agency said it estimated 51 of these 301 had the type of welding that was a concern.

The company had so far checked 96 and found three skid plates needing replacing, MaxiTrans said, all three on trailers with more than 800,000km (or about 5 years' use) on the clock.

Truck and Trailer Manufacturers Federation said its members recognised the need for a more defined maintenance programme because skid plates were difficult to access.

The federation was working with the Transport Agency on this, it said: "The information you have enclosed [the OIA response from NZTA] seems somewhat out of context, given the complexity of the issue."

"We believe what can be done, is in fact being undertaken by all those involved in a co-operative and collaborative manner. Safety is at the forefront of the practices of all our members."