Checkpoint - The Novopay school payroll system is facing "almost certain failure" after the end of next year, a business case from Crown-owned company Education Payroll shows. 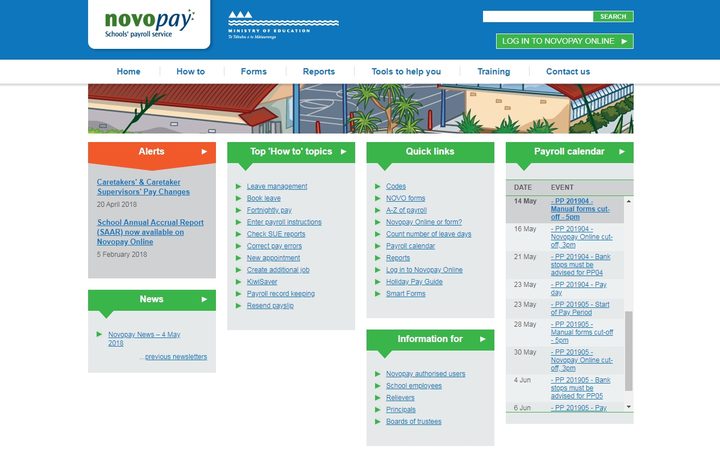 The Novopay teacher pay system was developed by the government then sold to Education Payroll. Photo: Screenshot

The October 2016 report obtained under the Official Information Act by IT news service Reseller News also said that although Novopay had improved, customer satisfaction was lower than it should be and the system still had significant defects.

"The schools payroll still carries an unacceptably high level of operating risk. While this risk will continue to fall over 2016/17, without investment this risk will start rising again from 2017/18 reaching "high" in early 2020 as the technology platforms age. This will lead to almost certain failure, affecting significant numbers of those paid through the service," the document said.

It said Novopay Online (NOL) was based on a feature of the Oracle Application Server, which Oracle would not support after December 2019.

"This will leave NOL without technical support for the key technology it relies upon.

"If problems occur with Oracle Application Server, Oracle will not provide support to resolve these problems. This is an unacceptable situation for a critical piece of software with such a high impact on the operation of the schools sector.

"To resolve this issue, NOL will either need to be replaced, or significantly rewritten."

The business case said improving Novopay and creating an entirely online system would cost $64 million over ten years above its regular funding in that time of $246m.

However, the extra spending would create about $40m in savings over that period.

"We're confident this work will be completed well in advance of the system becoming unsupportable, so absolutely no later than December 2019."

Mr Boennic said the work included making Novopay fully online, eliminating thousands of manual re-entries that often resulted in error, but would avoid the sorts of problems that dogged the introduction of the system.

"The payroll engine remains the same. What we're doing is changing the user interface. We will be working with schools on an incremental basis so we'll be talking to schools, designing the service with schools and then rolling it out incrementally so it's not a big bang," he said.

Educational Institute national secretary Paul Goulter said he was not surprised Novopay had serious problems and he was sceptical about efforts to fix them.

"I don't think there'll be any confidence amongst the sector that the payroll people can fix this. It's not really been demonstrated in the past, there's still a major legacy of issues around leave, super payments whatever that still haven't been fixed from the last debacle," he said.

"Steven Joyce promised he'd get this fixed and now we find no there are a hell of a lot of other problems and we're on a promise to get them fixed."

Principals Federation president Whetu Cormick said he was on Education Payroll's reference group but he had not heard about the potential for failure of the system in 2020.

"I'm sure that Education Payroll services, if this is true, will be taking it seriously and I'll be looking forward to having conversations with them about it."

Mr Cormick said there was still a lot of mistrust of Novopay, but schools' satisfaction with the system was high.

However, he said plans to move Novopay to an entirely online model made him nervous.

"When we had the big muck-up in 2012 we were given an assurance back then that it was going to work and so one of the concerns I have and I've raised this with Education Payroll, how assured can we be that the new system's going to work," he said.

The original Novopay system cost $30 million to develop and was launched in 2012. It immediately ran into problems, with errors in the pay of thousands of school staff.

The government spent $45 million stabilising the system and supporting and compensating schools. It transferred Novopay to Education Payroll in October 2014.