Workers who care for the dying have slammed the End of Life Choice Bill as dangerous and an "easy way out" for doctors who aren't equipped to deal with dying patients. 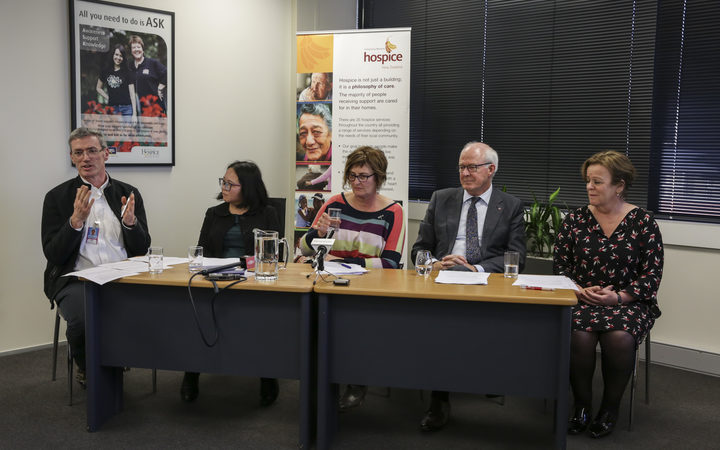 At a panel in Wellington yesterday, five palliative care experts voiced strong opposition to the bill, which seeks to give doctors the right to help someone die if they are terminally ill.

Hospice New Zealand palliative medicine specialist, Rod MacLeod, said it was not normal to want to be dead and if patients do it's because they are not getting the right care.

He said with good palliative care, the prospect of euthanasia does not arise.

"I've had one person who's persisted in their request over time, only one. When I've said to that person 'will it be today?' they've said 'no, no not today but maybe tomorrow'. In thirty years I've never met anybody where I've thought - they'd be better off dead."

The Netherlands, Belgium and Canada are some of the countries where euthanasia has been legalised.

But, Professor MacLeod said there was no place yet, where the law provided absolute safety to those who were vulnerable.

"There is no jurisdiction anywhere across the world that has produced a law that is safe - there have been cracks in all of them."

Te Omanga Hospice medical director, Ian Gwynne-Robson, said one issue for the sector was ensuring it had enough experienced doctors.

He said if euthanasia was an option, inexperienced doctors may offer it as the best option, when this might not be the case.

"Patient needs are very complex and fall into the too-hard basket for many doctors - euthanasia - the risk is that it's an easy way to empty that too-hard basket."

Dr Gwynne-Robson said the passing of the bill could lead to a slippery slope.

"Wherever the line is drawn, there will always be cases to push that line, which leads to the safety concerns."

"[In Canada] the law was set in June 2016 and there's already a challenge from a person who believes the criteria is too constricting."

He said opposition to the law change was not about denying people to have a choice.

"I think our current legal ethical regulatory framework permits huge amounts of autonomy like stopping a ventilation or refusing chemotherapy is already well entrenched and at the same time vulnerable people are protected."

Act leader David Seymour, who introduced the bill to Parliament in June last year has hit back, accusing the experts of fearmongering.

He insisted the vulnerable would be protected.

"Our own Attorney-General has written that my bill has sufficient safeguards and is consistent with the New Zealand Bill of Rights. So these guys, frankly, need to go jump in a lake, start debating on the evidence and stop speculating to create fear, uncertainty and doubt."

The bill says two doctors must be satisfied the person is eligible for euthanasia.

Eligibility includes being at least 18-years-old, in an advanced state of irreversible decline in capability and has the ability to understand the nature and consequences of their decision.

The doctors are also responsible for determining that coercion has not been a factor in their choice. If they are unsure they must refer the person to a mental health specialist.

Mr Seymour said if doctors do not want to be involved with euthanasia, they do not have to be.

He said it was unfair to force palliative care on patients who did not want it.

"In Belgium and the Netherlands, the assisted dying and palliative care causes have actually worked well hand in hand and I don't see why that couldn't be the case in New Zealand."

Dr Gwynne-Robson said all terminally ill patients were vulnerable to some degree, and many felt abandoned by the health system after hearing that there was no cure for their illness.

He said this often contributed to the desire for euthanasia.

"In my experience, there's always something that can be done, even when the objective's no longer the cure. It's my privilege and my responsibility to reassure patients that they will not be abandoned and I think changing the law critically undermines that."

The Bill is currently going through the select committee stage, after passing its first reading 76 to 44.

The committee is expected to report back to Parliament by September.