The widow of musician Grant Fell is defending the sprinkling of his ashes at the Taite Music Prize last night, saying it was a spontaneous tribute to a man who loved to be on stage. 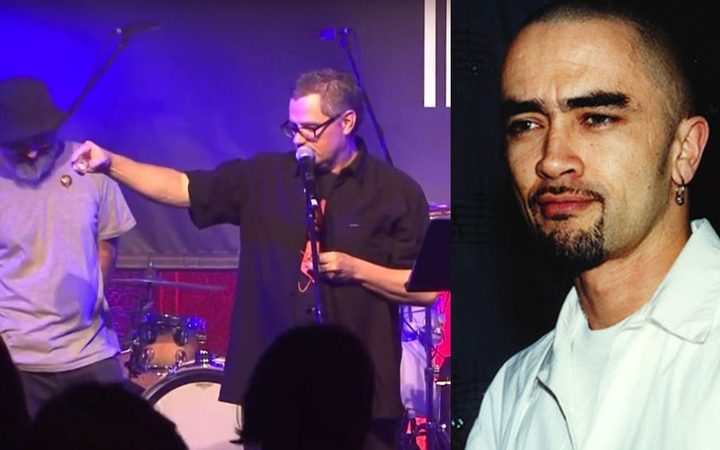 The ashes of Grant Fell (right) were scattered on the stage at the Taite Music Awards by his Headless chickens bandmates. Photo: RNZ

The Headless Chickens won the prize for Independent Music NZ Classic Record Award for their 1988 album Stunt Clown. Guitarist and vocalist Chris Matthews then produced a small vial of deceased bandmate Fell's ashes and sprinkled them on the stage.

The well-intended tribute has been criticised by some in the industry.

But Rachael Churchward said the vial had been blessed and, "contrary to some reports, contained only a small part of his remains".

She had agreed with Matthews that he would take the vial onstage when the band members accepted the award, so that Fell could be acknowledged along with the others in the band.

"On the night, Chris asked if he could scatter a little on the stage and I agreed. It was spontaneous.

"Grant was proud of his Ngāpuhi whakapapa, as am I of my own family's Māori heritage. We were not setting out to shock or offend anyone, but Grant wanted his ashes scattered in places he loved - and he loved being on stage playing music.

"I think anyone who knew Grant understands that he would have loved this. I understand this was not in line with tikanga, but we all come from different places and we don't adhere to every tradition. Music is a big part of our identity too."

She said she had the backing of her family on the matter.

"I just want to say that I cared for Grant through a terrible illness for three years, and he has been gone less than three months.

"I am still grieving his loss, and it is extremely upsetting being the subject of such comment, criticism and attention from people who don't know us."

Independent Music New Zealand and Auckland Live - who organised the cermony - said they were unaware of the plan to scatter the ashes.

"Tangata whenua have been consulted and will be performing a blessing at The Wintergarden in the coming days."

Speaking on RNZ's Morning Report the Taite Music Prize co-host and Music 101 presenter Alex Behan said it was "one of the stranger situations" he had been in as MC.

"I spoke to members of the band afterward and they feel it was their moment to have and that they were meaning it in the best of faith."

Musician Moana Maniapoto said she was "horrified" and that it was "absolutely bizarre".

"[It was] kind of disrespectful to a lot of people in the room.

"I understand the love they have for their musician but they didn't give anyone else in the room a choice in the matter," she said.

"There's no doubt we all love the Headless Chickens and Grant Fell. You know, he is adorable and a wonderful musician but I find it hard to believe that someone could grow up in New Zealand and think it is okay to do that."

Musician Teeks, who was also up for the Taite Music Prize, took to social media to express his unhappiness with the ashes being sprinkled.

First time I’m glad I didn’t win an award. Wouldn’t have gotten on stage with those ashes under my feet. Huge congrats to Aldous, still extremely humbled to have been nominated don’t get me wrong, but I was raised in a culture where that shit isn’t ok.