The delay in a government review into tree trimming is incredibly frustrating, the Electricity Networks Association says. 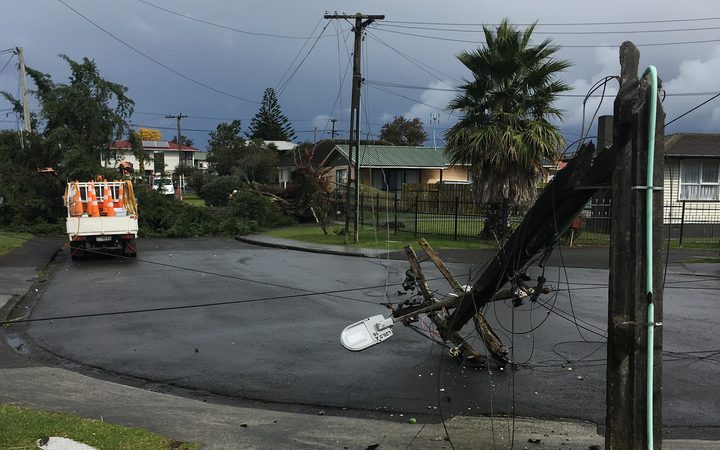 Tens of thousands of Aucklanders were left without power last week after strong winds brought down powerlines.

Vector chief executive Simon Mackenzie said crews out repairing the lines had never seen such damage but Vector was limited in what it could do when trees encroached on its lines.

"The regulations as they stand is that if a tree is near the line then we have to cut it once and then it becomes the responsibility of whoever owns the tree.

"Depending on whether the lines are on the low or the high voltage network, Vector can only cut a keyhole around the lines of either half a metre, or 1.5 metres," Mr Mackenzie said.

That did not make much difference when the wind picked up, he said.

"When windspeeds get over 70km an hour, no matter how much vegetation trimming you've done, trees start swaying significantly, and we get to 140km then you get massive trees being uprooted that could have been across the road or 20 metres away from the line and there's just nothing that can be done."

There have been questions about how secure the network is - but they often got stuck when people refused to allow their trees to be trimmed Mr Mackenzie said. 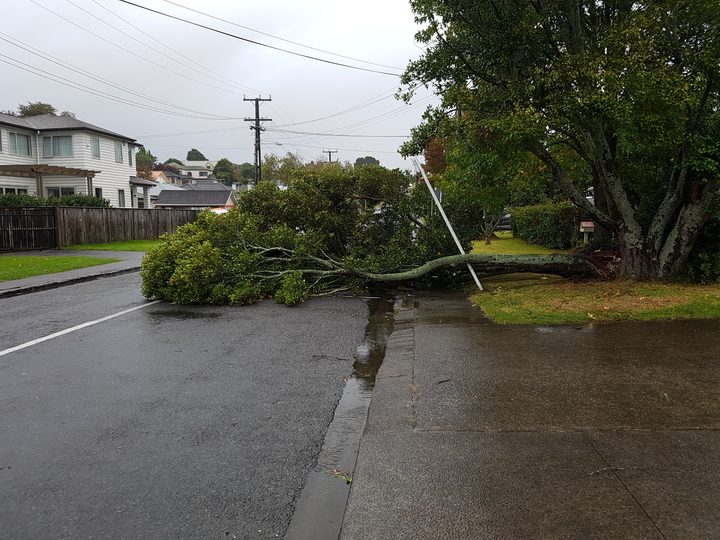 A tree at One Tree Hill that was brought down by the storm. Photo: RNZ / Tom Furley

"We've had plenty of instances outside of this storm where we have gone to trim trees and they really hate the prospect of a pohutukawa or a tree that they may have planted being trimmed."

The rules about tree trimming near powerlines are covered in the Electricity Regulations which have not been updated since 2003.

The Ministry of Business, Innovation and Employment announced a review of tree trimming rules in the government's 30 year Infrastructure Plan 2015.

A spokesman said it was indicated this would be done between 2017 and 2019 - but due to other scheduled priorities it had not yet been started. 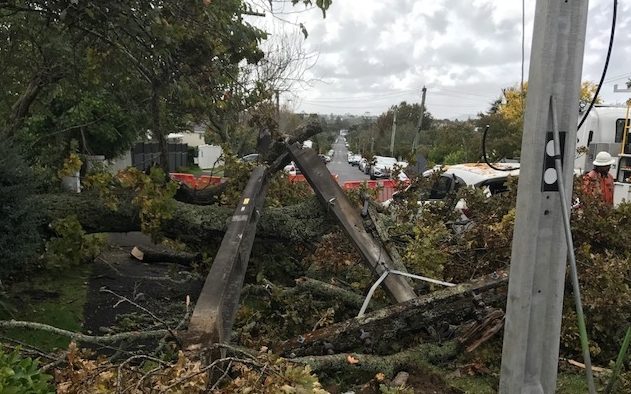 More damage from after the storm. Photo: supplied/ Vector

"The tree regulations are not working, we are seeing a lot of trees falling onto lines, the regulations don't take into account, for example, the height of the tree so it could be 1.5 metres away from the line but it could tower 10 metres above it, which means if it falls over it will land on the powerline."

Mr Peters said about 60 to 70 percent of power outages in a storm were caused by trees.

He said the regulations needed to give power companies the power to do risk assessments of trees on a case by case basis.

"Rather than looking at the tree and saying it has to be 1.5 metres away from the line, we look at all the factors such as height and the health of the tree and then we can come up with a better way of assessing the risk."

Mr Peters said one solution would be to put all power networks underground - only about a quarter of the country's powerlines are underground and to put the rest under would cost billions of dollars, he said.