The Wellington City Council hasn't ruled out reassessing buildings in the CBD after revelations that a building evacuated yesterday afternoon had previously been deemed safe by two separate engineering firms. 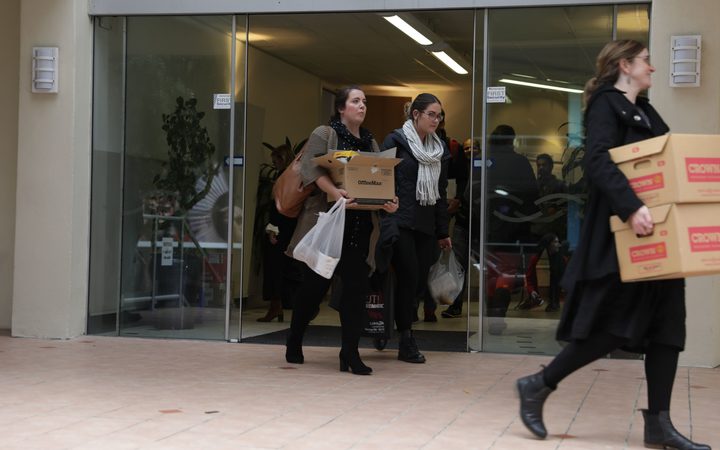 Up to 700 office workers had to leave the Boulcott Street building yesterday Photo: RNZ / Rebekah Parsons-King

Up to 700 office workers were given two hours to leave the Boulcott Street building - less than 24 hours after they were assured it was safe.

The building, 79 Boulcott Street, had been inspected by ISPS Consulting engineers and New Zealand Consulting Engineers following the Kaikōura quake, and was not on the city council's earthquake prone list.

Despite this, the building's owner commissioned an engineer's report late last year, which identified cracks on the floor and ceiling around internal pillars in the shape of large spider webs.

The city council first raised questions in March this year, after the owners contacted them for consent to undertake repair work on the cracks on multiple levels in the 13-storey building.

The council's chief resilience officer, Mike Mendonca, said it was worrying two firms inspected the building and did not pick up on the severity of the cracks, which could have caused the building to collapse in an earthquake.

"Of course it's a concern, that's why we worked closely with the building's owners to make sure the building was unoccupied as of 4 o'clock yesterday," he said.

"So, it's too early to say exactly what's happened and we don't quite understand that yet - we'll be working with the engineering fraternity and the ministry to understand that and to see if there are any consequences for us beyond this particular building."

In an email to tenants obtained by RNZ dated 5 April, the engineering firm which undertook the inspections, explicitly told the property manger they had assessed the building and it was safe to occupy.

The alarm was raised by the council after one of its engineers saw the report on the cracks by the building owners' engineer.

It's unclear how long the building has been unsafe, Mr Mendonca said.

Paul Campbell, from the Structural Engineering Society of New Zealand, said there were two levels of inspection - highly detailed or rapid.

"If it was the latter, a rapid inspection, that's visual it's not intrusive, it doesn't involve taking wall linings off, carpet tiles up, lifting ceiling panels etc.

"Issues were identified, it was just a matter of whether they were a risk to the safety of the people within the building and obviously as more information has come to light that changes the situation on an ongoing basis.

"So no, I'm not laying the blame anywhere and we're just trying to work through it now and currently, the tenants are my main priority," she said.

Ms McGhie said she was confident tenants would be able to re-enter the building.

Chris Roberts from the Tourism Industry Aotearoa is one of those tenants.

They were lucky they could temporarily relocate near by, he said.

"We're very fortunate that one of our strategic partners, Service IQ, have offices available right across the road so we've moved over there, we're set up and connected and back into business already so no great interruption as far as the business is concerned."

RNZ contacted the engineers who said the building was safe to occupy - but has not had a response.

Tenants will have to wait until next week to find out whether they will be able to re-enter their building.