The government has launched a compulsory recall of vehicles with Alpha-type Takata airbags - about 50,000. 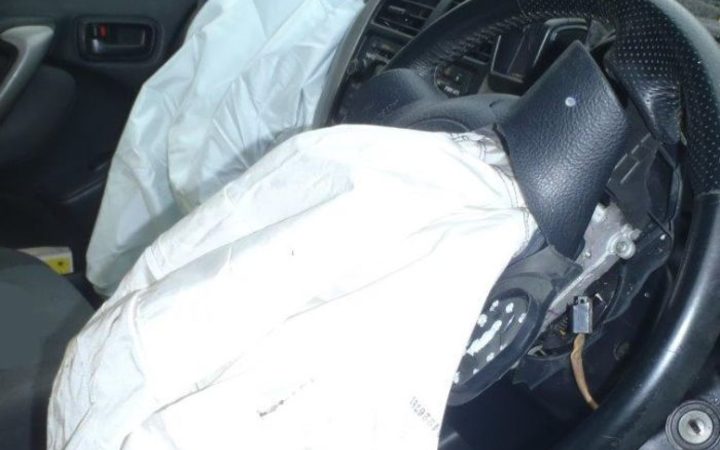 Takata airbags have a defect that can cause them to explode. Photo: NT Police

The recall requires all suppliers of the defective airbags to contact owners and replace the airbags by December 2019 or face a penalty.

That penalty for vehicle suppliers could be up to $600,000. Consumers will not have to pay to get their vehicle fixed, with those costs also borne by the suppliers.

The recall does not compel consumers to bring in their vehicles but it does require suppliers to fulfill various requirements including contacting the consumers.

The compulsory recall ordered by the government follows a voluntary recall set up by suppliers for the dangerous airbags, starting in 2013. Airbags have been replaced in about 29,000 vehicles so far.

Commerce and Consumer Affairs Minister Kris Faafoi said the recall would take effect in 40 working days' time but from today, no affected new or used vehicles with these airbags would be able to enter New Zealand.

A 40-working-day grace period would be given to vehicles already in transit.

Mr Faafoi said a voluntary recall for non-Alpha Takata airbags was in place and a monitoring group had been set up to keep track.

"If enough progress isn't made, I will enact a compulsory recall across the board."

The Alpha airbags, manufactured by Japanese company Takata, have shown a tendency to become unstable with age, humidity and heat, and can explode - propelling shrapnel into drivers and passengers.

At least 23 deaths world-wide have been attributed to Takata airbag explosions.

More than 450,000 vehicles are known to be affected by Alpha and non-Alpha airbags in New Zealand and this number surpasses 100 million globally.

"The issue is exacerbated by importers of used vehicles who have continued to import vehicles which have not had recalls closed out in the country they are sourcing their vehicles from," he said.

"Mostly these vehicles have been proceeding through import compliance without checking and then on-sold to unsuspecting New Zealand consumers."

"It is then left up to New Zealand distributors to try and identify these vehicles and endeavour to manage a recall."

He said it placed an unfair onus on the consumer to know whether or not the second-hand car they were buying, was affected.

Consumer New Zealand spokesperson Paul Smith said the compulsory recall would help motorists who were not sure if their car was affected.

"Making the recall compulsory will provide clarity for consumers over whether their car is affected and reassure them that the riskiest airbags are being prioritised."

Dr Smith criticised how long it had taken for the recall to be taken seriously.

"The recall was previously voluntary, covering about 452,000 vehicles with more than 307,000 yet to be fixed. That's a poor return for a recall ongoing for almost five years."

"It sends a clear message to the industry they haven't been acting swiftly enough to protect Kiwi motorists."

He said while the airbags had the potential to be dangerous, they were less likely to explode in New Zealand because they were affected by the climate.

"The risk of failure is greatest if the car's in a hot and humid environment. Recalls in Australia and the US have prioritised vehicles in areas of highest heat and humidity. We enjoy a temperate climate, so failure here is less likely, even for the oldest airbags."

The compulsory recall is the second ever in New Zealand and requires all Alpha Takata airbags to be replaced by 2019.

Check to see if your vehicle has been recalled. You can look for NZ-new models here or find a list of used-import models recalled in Japan here.