A dairy owner attacked with a machete says he tried to use his karate skills to fend off the attackers. 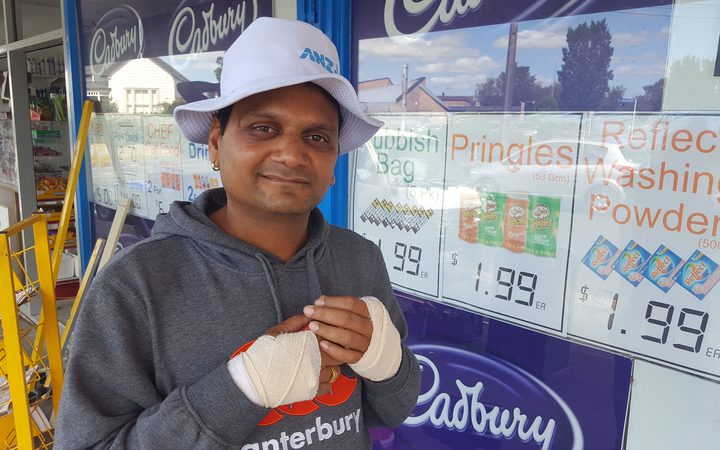 Dairy owner Sandip Patel suffered injuries to his hands and head in a machete attack at his shop. Photo: RNZ / Andrew McRae

Sandip Patel suffered a fractured skull and cuts to his hands and arms when two men robbed his Hamilton East shop yesterday.

He said he feared for his life.

The two men stole cash and cigarettes before fleeing in a stolen car, a silver Mazda Familia, FEP 218.

Mr Patel is back in his shop today after being released from Waikato Hospital.

Today he is surrounded by family and friends but yesterday it was a different story. 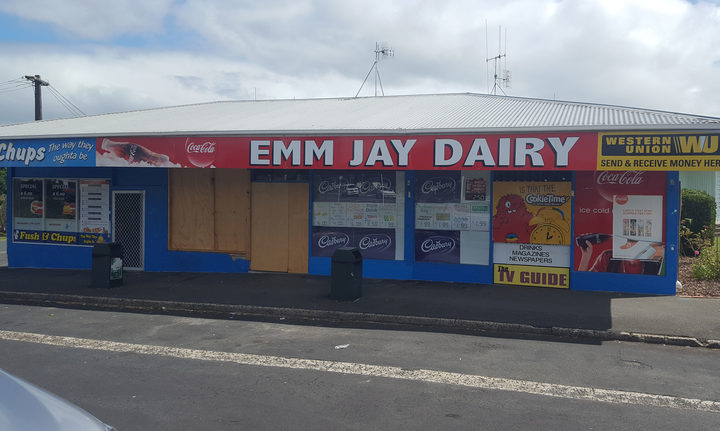 He was alone in the shop at 8.30am when the two men burst in.

While one man was taking the cigarettes another came at him with a machete, Mr Patel said.

"Straight away he put it on my head and after that he come in very close to me and then he again attacked my head and cut my hands as well."

Mr Patel said he put up a fight.

"I'm a karate black belt so I have to do my protection.

"I did punches to his face and I grabbed his hair and fight him."

As the men ran out of the shop Mr Patel tried to chased them.

"I'm falling down because of injury on my head.

"There was lots of blood."

Both of Mr Patel's hands are bandaged and there are cuts on his arms. He had a number of stitches.

He believes his life was in danger.

Today, he is up and about but moving gingerly.

He wants stiffer penalties for people who rob and attack shop keepers.

Mr Patel said it was his turn this week and tomorrow it could be another shop keeper who is attacked.

He wants long jail sentences for anyone convicted of such crimes.

"If police catch them they have to stay in jail. We don't want people like that in our community," he said.

Meanwhile, Hamilton police have found the car involved in the aggravated robebry.

The stolen Mazda Familia was found not far from the Hamilton East dairy, half-submerged in the Waikato River

Police said it had been towed out and will be forensically examined on Thursday.