A South Otago man has been jailed for almost eight years for his part in a drug ring transporting methamphetamine from the North Island to the lower South Island. 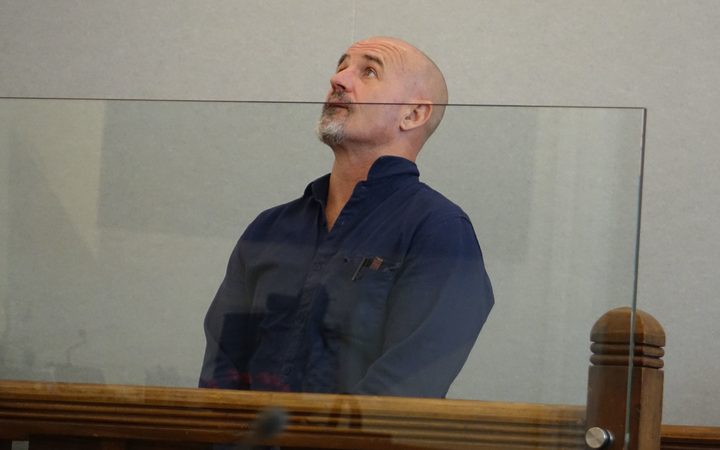 Kevin Wisely at his sentencing for his part in an inter-island drug scheme. Photo: RNZ / Tim Brown

Kelvin Bruce Wisely was today sentenced for a raft of drugs charges, including conspiracy to supply methamphetamine, supplying the class A drug as well as possession for supply of methamphetamine and cannabis, and possessing cocaine.

The Dunedin District Court heard the drugs were transported from Hamilton concealed in thermos flasks via couriers.

Cash would then be returned to the North Island as payment.

Before sentencing began, a hearing took place to determine whether $25,110 of cash found in the offender's bedroom would be forfeited under the Misuse of Drugs Act.

The 48-year-old contended the cash had come from the sale of two motorcycles and homekill sheep.

While being questioned by crown prosecutor Catherine Ure about the origin of the money, Wisely made a frank admission.

As she questioned him about his accountancy practices, which he claimed involved using a notebook to keep track of the money which was being paid to him for one of the motorcycles, Wisely admitted: "I haven't thought a lot of things through in my life - that's why I'm sitting here".

A summary of facts said police intercepted a payment of $39,500 for four ounces of methamphetamine on 17 July, the money was destined for Wisely's associate in Hamilton.

Two days later a package destined for Wisely's home near Milton was intercepted by police and found to contain three ounces of methamphetamine.

The drugs involved in those three days alone held a street value of almost $200,000.

New Zealand had seen a rapid rise in methamphetamine manufacture and distribution in recent years, the summary said.

"The impact of methamphetamine on the New Zealand public has been significant, affecting both the community in terms of social cost, individual families and in some cases the destruction of families and death," it said.

Wisely's offending came to the attention of police last year.

In May, he supplied an associate with 29 grams of the drug.

The man was arrested by Invercargill police and found to be in possession of 3.5g.

He was held in detention as police suspected him of internally concealing more of the drug. He was subsequently found in possession of a further 25.5g.

Over the following week, Wisely contacted three other associates, two of whom he was supplying ounces of methamphetamine to deal in Otago and Southland.

Those conversations revealed one of the associates was finding it more difficult to sell the drug as the area he was supplying was "flooded" with methamphetamine, the summary said.

Police raided Wisely's address at Milburn - about 50km from Dunedin and near Otago Corrections Facility - on 19 July.

They discovered just under one ounce of methamphetamine in a freezer, the $25,110 cash, scales and bags, and four thermos flasks - two of which were identical to the one intercepted by police.

A commercial cannabis growing operation was also located at the address and 214g of dried cannabis head.

Police also found a small bag of cocaine in his wallet.

"During the period of the investigation the defendant sold or had in his possession to sell a total of 308.5g of methamphetamine," the summary said.

When spoken to by police, Wisely said he had only been involved in the methamphetamine operation for several weeks after he "had been approached with an offer too good to refuse".

"There's nothing haphazard or amateur about it," he said.

The judge acknowledged that the methamphetamine trade trafficked human misery.

"You Mr Wisely can't fool yourself that your offending hasn't contributed to that misery," he said.

"You are an integral part of the problem ... you feed it."

Judge Crosbie sentenced Wisely to seven years and 10 months on the charges of supplying methamphetamine and possessing the drug for supply.

The judge also ordered forfeiture of the full amount of cash.

Wisely raised his eyebrows in disbelief as the forfeiture was announced.