Māori, conservationists and fishing interests are sounding the alarm over plans to dredge the entrance to Whangārei Harbour. 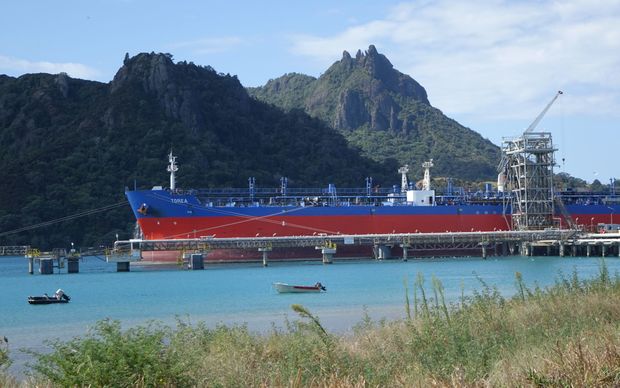 Refining New Zealand wants to deepen the channel, so oil tankers can come into the harbour with full loads.

But it's facing some stiff opposition.

At hearings in Whangārei, independent commissioners have been listening to evidence from experts on everything from sediment plumes to cultural effects.

Much of the evidence has been highly technical and might be described as a little on the dry side.

The well-known Ruakaka eco-warrior, 83-year-old Margaret Hicks, was in top form, addressing the commissioners in her trademark forthright manner.

The British former round-the-world solo yachtswoman told the commissioners that dredging would drive Bream Bay oystercatchers away from their last safe roosting place in the harbour.

"Let me tell you, if this goes ahead, that will evict the birds that are there, and that will make the oil refinery no better than introduced pests," Mrs Hicks declared.

But Refining New Zealand believes its proposal will have little or no effect on the environment.

The company is asking the Northland Regional Council for resource consent to dredge 3.7 million cubic metres of sand from the Whangārei Harbour entrance, and dump it on the seabed at two sites, outside the heads.

It says creating a deeper shipping channel will allow the big Suezmax tankers to come in fully loaded - instead of less than full as they do now.

Bringing in a million barrels of crude at a time would mean about 10 fewer tankers a year; efficiencies for the refinery and savings for its fuel company customers, the refinery said.

It would also help Marsden Point maintain its competitiveness with mega refineries overseas.

Northland's Chamber of Commerce is among submitters who support the project.

The chamber's chief executive, Tony Collins, said the refinery employed 500 people including contractors, and was hugely important to local firms and the regional economy.

If it wants to make efficiencies it should be supported, he said.

"In the short to medium term it plays an important role in Northland's economy and New Zealand's infrastructure and making sure businesses can do what they need to do," he said.

"And we need to support it within the bounds of environmental and cultural aspects."

But it's those aspects that are being challenged by submitters including the Department of Conservation.

DoC is worried about inadequate monitoring of dredging effects, and the potential impact of sediment on Motukaroro marine reserve, rocky reefs and Mair Bank, where shellfish suffered a massive dieback a few years ago.

And its concerns are shared by the fishing community, both recreational and commercial.

Alan Alcock, from the Ruakaka Residents and Ratepayers Association, said the main sand dumping site would be next to Three Mile Reef, a popular fishing spot.

"Plus the juvenile fish flow across that reef into Bream Bay and across Mair Bank into the harbour - so any dumping of waste there would cover the seabed to one-and-a-half metres deep and turn the reef into a non-fishing environment," he said.

When the tide turned the other way, Mr Alcock said the dredging would end up on what recreational fishers knew as 5-Mile Reef, which would also be a problem.

The refinery should dump its dredged sand on land, not the seabed, Mr Alcock said.

"Our strong preference is for the council to do more work to investigate land-based disposal of that dredge spoil."

The council was legally required to promote land-based disposal but it was not apparent that it was doing so in this case, Dr Helson said.

Some of the strongest opposition to the dredging proposal has come from nearby Takahiwai marae and tangata whenua, Patuharakeke.

Their ancestral pipi beds on Mair Bank are only just showing signs of recovery from near complete collapse.

They're concerned about the impacts of dredging - and the ongoing maintenance dredging - on birds, fish and marine mammals that visit the harbour including orca.

They're also frustrated at the prospect of yet another man-made change to the integrity, and mauri (life force) of the harbour.

But Refining New Zealand believes it can avoid adverse effects and any impacts will be minor.

It has offered to mitigate effects of the dredging by monitoring, funding a kaitiaki forum, and projects to enhance the harbour and its birdlife.

But Patuharakeke's environmental spokesperson Juliane Chetham said there were some things that could not be mitigated.

"Their experts are saying, that by participating in mitigation and monitoring after the fact, that that's essentially kaitiakitanga," she said.

"And we're saying well, is there any point in practising kaitiakitanga if there's nothing left to be the kaitiaki of?"

It was clear that the oil refinery did not have a long-term future, Ms Chetham said.

"And what we're thinking is, is it worth making ermanent potentially adverse changes to the geomorphology of our harbour, of our special sites, of significance for something that may not last very long?

"We just don't think it outweighs the cultural and ecological values around the mouth of our harbour," Ms Chetham said.

The Refining NZ resource consent hearing has one day left to run, later this month.