The country's only oil refinery says a hapu is nervous about its plans to dredge the approach to Whangarei Harbour. 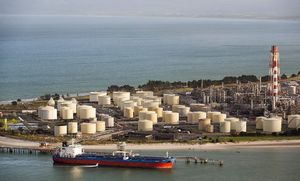 Refining New Zealand, the country's only oil refinery, said a hapu is nervous about its plans to dredge the approach to Whangarei Harbour.

The company wants to bring in more oil to its facility at Marsden Point, which would mean heavier ships.

Refining New Zealand said it had held early talks with the people of Patu Harakeke.

Chief executive Sjoerd Post said he believed the refinery was at the beginning of building a trusting relationship.

He said when he and his team visited a Patu Harakeke marae, the people could not believe the refinery could not answer all their questions.

Mr Post said his company did not know how much they wanted to dredge at this stage, but they were being upfront and honest about their undeveloped plans.

He said the refinery's proposals should sit well with the local sub-tribe, because so many tangata whenua work at the plant.