A blind man is calling for an inquiry into this year's census, saying there are barriers for blind people and other groups to access the census. 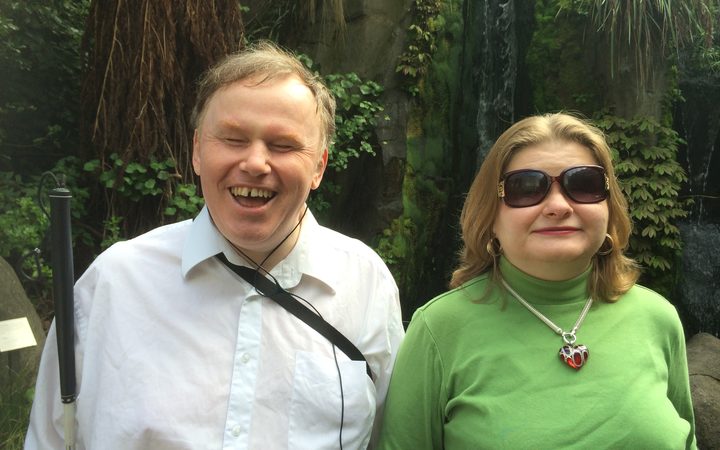 Johnathan Mosen and his wife Bonnie, who is also blind. Photo: Supplied

The census - which is being held tomorrow - is being done online this year. To take part people need to key in the access code which was mailed to them.

Stats NZ said over 1.2 million people have already filled out the census online ahead of census day tomorrow.

Mr Mosen, who is blind, said he did not realise the census was on until he heard about it on RNZ's Morning Report on Friday.

"I got the letter in the mail with the code. I use software which reads printed material to me but because the top of the letter is in te reo it couldn't do that.

"So I called the census hotline to see if they could verbally give me the code or email it to me, but they couldn't."

The 2018 census had been an accessibility debacle, Mr Mosen said.

"It makes me feel as a blind person like I'm a second-class citizen," he said.

"It's not just blind people who felt disempowered and inconvenienced, it's many other groups as well and we need ot have a public conversation about how we can avoid this possibly happening again in 2023."

Mr Mosen said he was perfectly capable of completing the census online and had done so in the past.

"The forms used to be hand delivered so the person who came to my door was able to read me the code I needed, but with them being delivered in the post this year it's been completely overlooked."

After expressing his concerns on his blog and social media Mr Mosen finally got some action.

"The Wellington regional manager of Stats NZ actually came to my house on Sunday afternoon to physically read my code from the printed letter.

"What a waste of resources, when Australia had its census in 2016, blind people could get their codes by email and by text message and it just seems like a gross oversight that no thought was given to the fact that blind people with the correct technology can do it online but the codes have to be accessible," he said.

If it was a legal requirement for people to fill out the census, then the government has a moral obligation to make sure that everyone can access it, he said.

"It's not like this is a new thing, blind people vote easily enough, we call the Electoral Commission and declare we are blind - they then tell us the code we need, text it to us or email us."

Mr Mosen has written to the ministers of statistics and disabilities to express his frustration.

"The 2018 census has been a debacle, it has made me feel like a second class citizen - there needs to be an inquiry into how the whole thing has been handled because it is not only blind people who have felt disempowered by this."

Mr Mosen said he has heard there was an option for the blind to call the Blind Foundation to get the code verbally but that ended last month.

"It's concerning that a third party would have to get involved in Statistics New Zealand's work in the first place."

"If someone who isn't able to see but can use a telephone will be able to ring the contact centre on 0800 CENSUS, and they'll be able to respond to any questions.

"There's also people who are out, kind of going around, so people can go over and actually help people to fill out the forms if necessary and we've been doing that in a number of cases."