Earthquake and cyclone hit business owners in Kaikōura say finding staff has been next to impossible over summer. 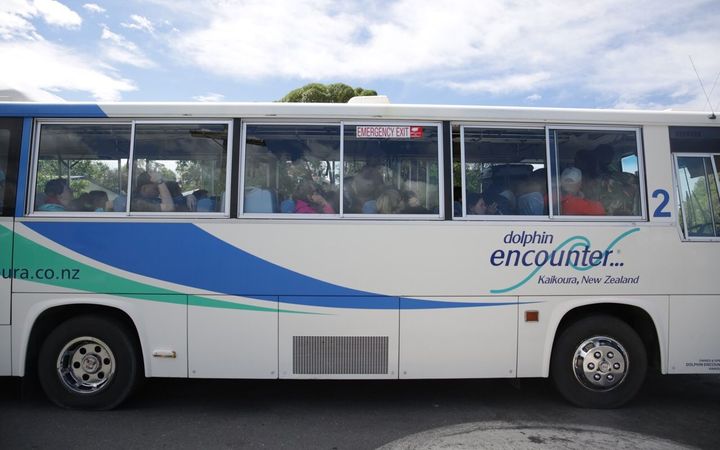 Tourists are flocking to Kaikōura by the busload. Photo: RNZ / Rebekah Parsons-King

A 7.8 magnitude earthquake in November 2016 shattered State Highway 1 north and south of the town, cutting off Kaikōura's lifeblood - tourists.

This year, the road was briefly shut again due to more slips brought down by Cyclone Gita.

The road is now open, but a shortage of staff is making it hard for business owners to cope with huge volumes of travellers.

His business was busy during the year SH1 was closed, but he said it was nothing compared to the day the road reopened.

"Before the road opened we gave the team a pep talk, we were trying to throw numbers at them ...'we are going to go through this many chips, this much wrapper, this many customers an hour'," he said.

"They didn't know what to expect, and then when it came ... they were blown away."

Prior to the earthquake the town would see about 4500 vehicles, on average, travelling along SH1 each day.

According to mayor Winston Gray, after the road reopened late last year, that jumped to 5500 vehicles.

Mr Hill said he has had some work enquires recently, but it was still hard keeping up with demand.

Kathy Christian, the co-owner of Gateway Motor Lodge, said she also had not been able to employ enough staff to service the 20 unit motel.

Ms Christian said the town was even busier than it was before the earthquake but given the staff shortage, she said the extra work fell onto business owners.

"We have got our regular people, but we do need those top-up people in the hefty season, we have just gone through the heaviest part of the season and ... we are short staffed.

"That just means we have to do a lot more ourselves."

Kathy Christian said the shortage was likely associated with a lack of accommodation in the area, but there was little the locals could do about it.

"We really just have to ride the storm... I don't know what the solution is until Kaikōura can get its accommodation availability better for the people that could return," she said.

"We even considered offering one of our units as accommodation just to get the labour into the town."

The earthquake destroyed about 30 homes in the area, squeezing an already hot housing market.

Many of the remaining homes - and available rental properties - were snapped up by companies rebuilding SH1.

To help ease the pressure, the Ministry of Business, Innovation and Employment is constructing a temporary village in Kaikōura, which will consist of seven two bedroom cabins.

But that is not due to open until then end of the month at the earliest.