An Antarctica expert and environmental advocate is calling on the chief executive of Air New Zealand to immediately withdraw their new safety video set in Antarctica. 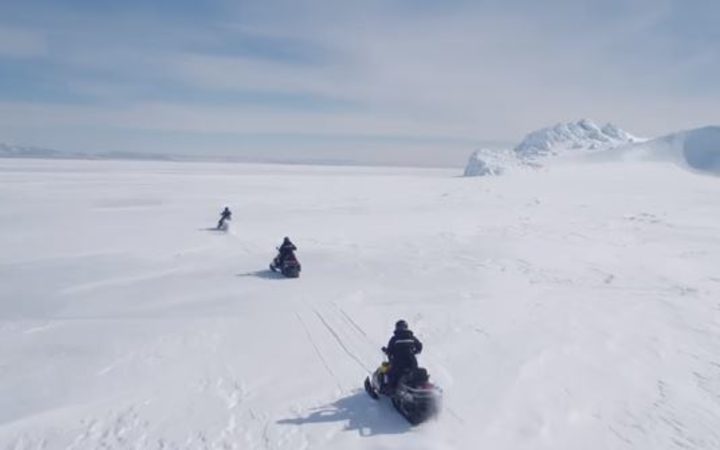 UN Environment Patron of Oceans and endurance swimmer Lewis Pugh famously swam the Ross Sea off Antarctica - clad only in his trademark speedos to raise awareness about protecting the region.

Dubbed the "Sir Edmund Hillary of swimming", he later helped broker the establishment of a Marine Protected Area, the largest protected area in the world, in the Ross Sea.

Mr Pugh yesterday heard Morning Report's interview with Nicholas Bennett, whose father was the chief purser on the Air New Zealand DC10 which crashed into Mt Erebus in 1979, killing all 257 on board.

This morning he told the programme Air New Zealand have got it "really badly wrong" after releasing their new safety video yesterday.

"It portrays Antarctica as the next great adventure playground," he said. "Let's be very clear, it is not."

"Antarctica is a unique eco-system and it's very precious. It has already been heavily impacted by climate change and pollution."

"We have a duty to protect this continent and all the incredible animals that have live there for thousands and thousands of years undisturbed," Mr Pugh said.

"We have to remember that in Antarctica we humans are guests."

It was also "deeply disturbing" that the safety video was filmed a few kilometres away from Mt Erebus, he said.

"There will be sons and daughters and mothers and fathers who now get on an Air New Zealand flight and have to watch this safety video," he said.

Mr Pugh pointed out that Sir Edmund Hillary was meant to be on the flight but could not go. Instead his friend and mountaineer Peter Mulgrew went. Mr Pugh said he wondered what the public's reaction to the video would be had Sir Edmund been killed instead, and whether Air New Zealand would still have made the video.

"Everybody in New Zealand knows about this flight. This safety video was filmed just a few kilometres away from Mt Erebus. It's an extraordinary decision," he said.

"This video is very poor taste and it sends the worst message about protecting Antarctica. It's a unique continent, and its not the next recreational playground.

'You never forget them'

Philipa Lewis's brother John Broad and his daughter, also called Philipa, were onboard the flight.

She said almost four decades on, not a day goes by when she didn't think about them.

"You never forget them, you never will - but time does go by and we can't let that grieving keep us back - we've got to move on."

Ms Lewis said Air New Zealand's chief pilot David Morgan notified her about the video before it was publicly released and she had no problems with it.

"The video itself I think it was very tastefully done. I think it's quite original and I love the way the children were engaged in it too."

But a memorial at the crash site was long overdue, she said.

She had been assured by Mr Morgan that a memorial was being prepared in time for the 40th anniversary of the disaster next year.

"And I think it would be very fitting that there was somewhere where people could go, not a cemetary please," she said.

"Somewhere people could go to just pay their respects to those who perished."

Reverend Richard Waugh who heads the Erebus National Memorial Advisory Group, said he has been approached by at least 12 families upset by the video.

However, Phillip Kennan isn't one of them. Mr Kennan's sister Dianne Kennen was a flight attendant.

"The only thing that one could possibly take offence from was the location," Mr Keenan said.

"I don't think in anyway it's using the Erebus tragedy or disrespectful...to the people who lost there lives in it."

Air New Zealand has defended its new safety video, saying it is tasteful.

David Morgan said earlier this week the airline approached filming in a sensitive way and had been very careful to ensure none of the footage used would feature Mt Erebus or memorial sites.

He said they had received positive feedback from family members after they told them of their decision to film.

But Mr Pugh had a sharp message for Air New Zealand:

"I'm calling on the CEO to show leadership and to withdraw this safety video immediately," he said.