Nearly 100 people have protested against plans to build New Zealand's biggest chicken farm next to a marae, just south of Dargaville.

The farm would be within 350m of Kāpehu marae, angering locals who marched down the main street of Dargaville today to the Kaipara District Council building.

One of the protesters, Kerry Wilson, said locals felt blindsided.

The council has given the public one month to give feedback and make submissions on the proposal but local resident, Rosie Donovan, said that was not enough time. 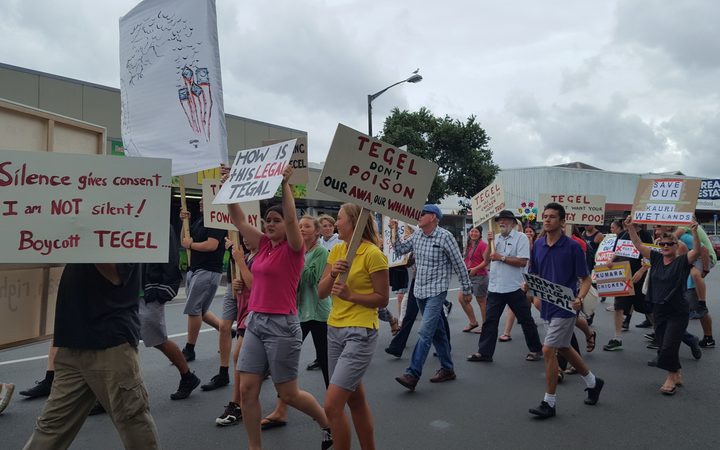 Nearly a hundred people have turned out to protest against plans to build New Zealand's biggest factory chicken farm next to a marae, just south of Dargaville. Photo: RNZ / Shannon Haunui-Thompson

She said the farm would completely change the quality of life in the area.

Kaipara mayor Jason Smith came outside to speak to protesters, saying that any opinions they had should be made in the submissions.

Tegel said it voluntarily sought public notification on its plans to build a "state-of-the-art free-range broiler" farm because it recognised it was of significant interest to the local community in Arapohue.

The company also said it was committed to working with locals through the process.