"Watch this space" - those were the confident words of Conservation Minister Eugenie Sage, after receiving a petition with 65,000 signatures calling for a ban of single use plastic bags. 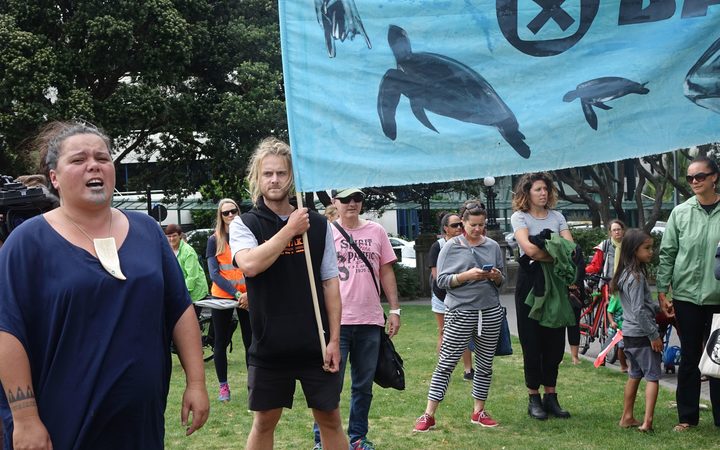 More than 100 people were at Parliament today, alongside the Jane Goodall Institute and Greenpeace, to hand over the petition and a letter, endorsed by former Prime Minister Helen Clark.

Dressed in plastic bags, holding banners, supporters chanted as they arrived at parliament.

Tina Ngata, an advocate for sustainability and indigenous rights, led the crowd.

She said New Zealand, a country often at the forefront of change, had fallen behind.

"We certainly aren't the leaders in this space, but we can be again.

New Zealanders use over a billion plastic bags a year, and Laurie Foon from the Sustainable Business Network said she was worried about the impact the bags would have on the future.

"I'm also standing here for my children because I'm an eternally positive soul, but when I am really becoming concerned about what our planet is going to look like for their future - that's the emotion that's coming up.

"I also feel embarrassed as a human that we've actually got to this point," she said.

The National-led government didn't support a levy on plastic bags, but had been in talks with councils and the retail industry about it.

"We use about 1.6 billion each year in New Zealand. They are a convenience...but they have significant impacts on wildlife.

The petition would be tabled in Parliament, then referred to select committee and an option would be presented within months, Ms Sage said.