A starving dog with a bashed in eye, a neglected horse so ill it struggled to breathe and a duck in excruciating pain after its beak was blown up by fireworks. 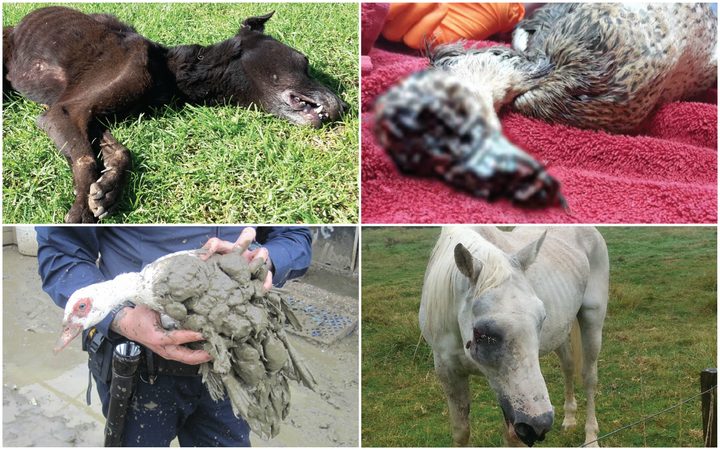 The abuse of these animals were catalogued in the SPCA's list of shame. Photo: Supplied / SPCA

These are among the worst eleven cases of animal abuse outlined in the SPCA's list of shame for the past year.

Another example includes 600 birds kept in filthy, overcrowded conditions with so little food they were trying to eat other dead birds.

SPCA chief executive Andrea Midgen said the list did not necessarily point to an increase in animal cruelty, but suggested a growing public sympathy for animal welfare as reporting of cruelty increases.

"I think we're seeing an increase because people have become more aware, and are reporting more.

"I don't know that it necessarily means that there are actually more cases happening, I just think that we're hearing about them more," she said.

"But we're also hoping that by educating and advocating in this space that these things will improve over time."

Ms Midgen said she hoped the list would encourage people to donate to the SPCA, as government funding makes up only about 1 percent of its operating budget.

The list includes some success stories, where animals were able to be saved, but also gives the details animals abused so badly that had to be put down.

"Obviously we try and save as many as we can," she said.

Around 15,000 animal welfare complaints are lodged with the SPCA each year.