Hundreds of eels have died, along with carp and flying insects, in the wake of a massive algal bloom at Lake Omapere near Kaikohe. 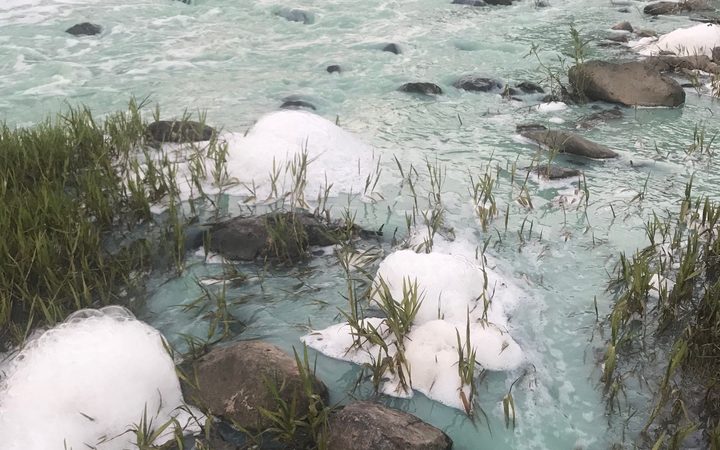 Neville Lewis who farms near Lake Omapere couldn't believe his eyes when he checked the river last Saturday.

The water spewing from the lake outlet had turned a glacial blue topped with a white foul-smelling foam.

The river turned a bilious green, as he watched.

"It happened so quickly and it was so dramatic, to see it happening - it was changing before your eyes," he said.

Overnight, the cyanobacteria population in the lake had exploded.

And the result was an algal bloom that's been shunted all the way downriver to the Hokianga Harbour.

Lloyd Brennan who farms next to the lake, said the eels and grass carp near the outlet didn't stand a chance.

"What was in the water, the bloom coming out, it looked as the eels and carp couldn't breathe.

"I saw eels up on the bank with their gills going hard out."

"It's just so sad, you know; they struggled for life; dead, stranded on rocks and now with them decaying in the river, the stench..." she said.

The farmers are among many who draw water from Lake Omapere or the Utakura for their stock and their households.

Neville Lewis switched his intake to a nearby creek the day before the bloom when a neighbour said the lake didn't look good.

Lloyd Brennan hastily trucked 160 head of cattle to the other end of the farm after the bloom erupted.

He said there were signs the algae were building up weeks before, after flying insects began dying messily, in large numbers.

"I'm not sure what they were, but they were full of this green slime which must have been the early stages of the algal bloom. My man who lives down the road, he was having to water-blast his deck every morning because they were coming onto his windows and dying and leaving this green jelly on his deck."

But there were more scientific signs a bloom was imminent.

The Northland Regional Council monitors the lake water, and a month ago it warned the Northland DHB that the volume of algae in the water had exceeded the level considered safe for swimming.

In the words of staff, the biovolume was over "contact recreation" guidelines.

According to Ministry for the Environment guidelines that should have triggered a red alert: involving media releases about the risk and instructions from the DHB to the Far North Council to put up warning signs.

No releases went out about the lake, and no signs went up.

After the bloom, Neville Lewis was so worried about tourists on the nearby cycle trail and the state of the river, he put up his own signs warning them to keep away from the water.

"It still stank and there were still no signs," he said.

"You can't blame anybody for what's happened.

"That's just the way things are. But if people are monitoring stuff, they should tell us if things are changing. It's not hard, is it?"

Downstream at the Horeke hotel, publican Laurel Maddren said tourists coming in off the Twin Coast cycle trail deserved to know they could be at risk if they swam or waded in the river.

As did her young nephew who'd had skin rashes after swimming, she said.

Mrs Maddren said residents had had no official word on the water since the bloom but she had been cautioning visitors.

"We had one lot of guests through and the children were just playing in the water and we had to ask them to come out. It's not a good look. It's a beautiful harbour where we live and it seems such a shame they can't get in the water and swim."

A DHB spokesperson told RNZ earlier this week there had been no need for warning signs before the bloom because testing had not shown any toxins.

But a regional council manager, Colin Dall said the Ministry's guidelines say the trigger for public warnings is the volume of algae in the water and the Omapere samples were well above that level in mid-January.

He said the councils and the DHB have been working on a protocol for dealing with algal blooms since last December, and they'll be reviewing their response to the Omapere one, next week.

The Far North District Council said health warnings about the lake and Utakura are now going up along the cycle trail.