A state of emergency has been declared in Taranaki where former tropical cyclone Gita has knocked out power to 23,000 properties. 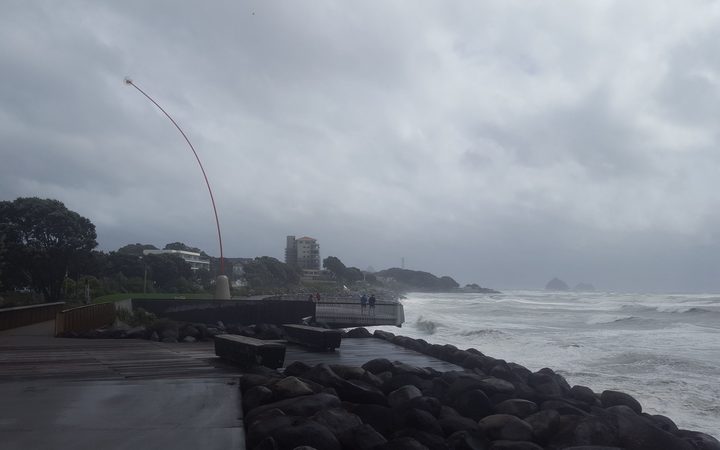 States of emergency have also been declared in Nelson, Westland, Buller, Greymouth, Selwyn and Christchurch as Cyclone Gita hits the country.

The storm is now hammering Taranaki and the West Coast with winds of up to 150 kilometres an hour.

Lines company Powerco said fallen trees and branches had cut power throughout the region and wind gusts of up to 140km/h were making repair work difficult.

Some people may be without power overnight and into tomorrow.

A fallen tree has ruptured the pipeline from the New Plymouth water treatment plant to the Mangorei reservoir and residents in the city's east are being urged to conserve water.

Gita touched down in Taranaki on schedule at 3pm this afternoon and the wind has been steadily rising since.

Emergency services are dealing with multiple downed trees and powerlines.

A tree fell onto a car with a woman inside in Stratford, while a truck was flipped on its side in Opunake.

Both drivers had miraclulous escapes.

Taranaki Port has been closed from 10am.

MetService warned high tides overnight were likely to bring large waves to Taranaki about 2am.

Severe gales are expected to hit Taranaki, Taihape and Whanganui, and the lower North Island. Nelson and Buller, Marlborough, Westland and Canterbury are also expected to get severe south to south east gales.

It said the wind would start to rise rapidly from about 4pm and should drop significantly by 4am tomorrow.

Tides, strong winds and heavy rain could bring storm surges and waves up to 6m high.

Communication wires are also at risk, with Chorus saying it had checked and re-fuelled the generators in its exchanges and put portable generators in areas where the weather is expected to be at its worst - in case power failed.

Taranaki - What you need to know

* Gust of up to 140kmh in South Taranaki and 120kmh in North Taranaki are expected to continue until 1am, after which time winds should gradually ease.

* However, the effects of the storm will be felt well into tomorrow and beyond, due the scale of damage to infrastructure.

* The effect of storm swells on vulnerable coastal communities is being monitored.

* Do not travel unless absolutely necessary.

* Residents in eastern parts of the district - New Plymouth, Bell Block, Waitara, Tikorangi, Onaero and Urenui - are urged to conserve water and use only the bare minimum.

* If your power is out, be prepared for a lengthy wait before it is restored.

* Keep an eye on the Facebook and Twitter feeds of Taranaki Civil Defence, Powerco, NZTA and your local district council.

* Treat all downed powerlines as live. Do not go near them.