The West Coast had around 9000 lightning strikes as a thunderstorm and heavy rain worked its way up the South Island. 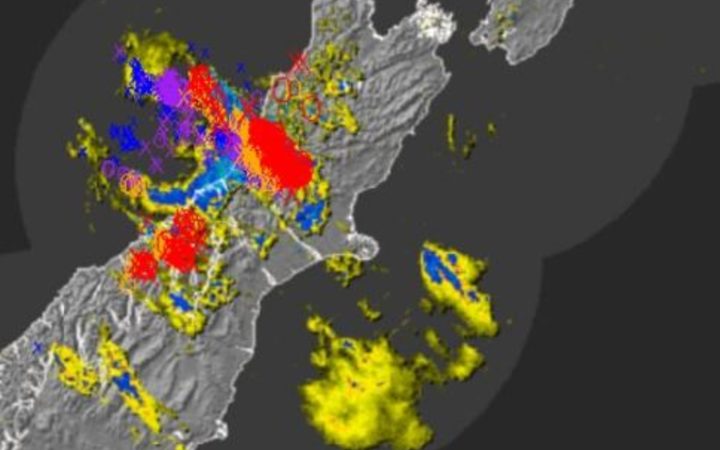 The West Coast has been hit by around 1500 lightning strikes this morning. Photo: MetService

Rain earlier in the day yesterday caused a number of slips on State Highway 6, including between Whataroa and Haast, Westport and Greymouth, and at Barrytown, but the road is now open.

MetService forecaster Cameron Coutts said most of the lightning strikes were out to sea.

He said the the heavy rain warning for Buller was lifted at 5pm, but the West Coast was in for more heavy rain on Sunday, particularly around Fiordland.

The downpours came ahead of warnings of gales and heavy rain from Cyclone Gita, expected to make its way to New Zealand early next week.

Our latest blog post with all of the latest information about #TCGita is now up: https://t.co/SuKgO06ePg People are advised to take the next few days to prepare themselves. If you don't know where to start, read: https://t.co/TkBnjKzn8c ^CF pic.twitter.com/s2xHthT77u

MetService said Gita was expected to curve southwards and gradually weaken to a category two cyclone, then a category one cyclone, before turning into an extra-tropical cyclone.

It's likely to cross the country on Tuesday or early Wednesday, and bring severe weather to a broad area from Canterbury northwards, the forecaster said.

MetService is still not certain exactly where the cyclone will cross New Zealand. It will start issuing updated tracking maps from late Saturday.

The forecaster warned of gales, downpours - with the potential for rapidly rising streams and rivers and flooding - and possible coastal inundation.

The first effects could be heavy rain for the South Island from Westland and Canterbury northwards.

The far south of the North Island, including Manawatu to Wellington and Wairarapa, could be in for the same.

Any gales would be worst in Westland, the Canterbury high country, Buller, Nelson, Marlborough, Wellington, Kapiti, Wairarapa and Taranaki.

Use the weekend to tie stuff down - meteorologist

"New Plymouth to Auckland is the current hotspot for landfall."

Ms Griffiths said she was concerned about the wind the storm will bring.

She also said the lower North Island and top of the South Island could see a lot of rainfall.

She said use the weekend to tie stuff down, get stuff inside and be ready.

All alerts have been lifted in New Caledonia as Gita passed to the south of the Isle of Pines.

Initial reports say the storm caused no serious damage. The system had wind gusts of up to 130 km/h and heavy rain.

The now category three cyclone has caused havoc in the Pacific, destroying house, flooding homes and businesses knocking out communications in Samoa, Tonga and Fiji islands.

In Tonga, nearly 200 homes across Tongatapu and 'Eua have been destroyed and many others are badly damaged.

Aid has slowly been getting to rural areas which appear to be hardest hit.

Town officer for Alakifonua and Pelehake has encouraged people not to wait for aid, but to stand on their own feet.

A period of rain this morning, then fine spells and the odd afternoon shower. Northerlies change southerly this afternoon. High 28°C; Low 12°C