The massive fire in the Dunedin suburb of Burnside is under control but still smouldering despite rain that started overnight. 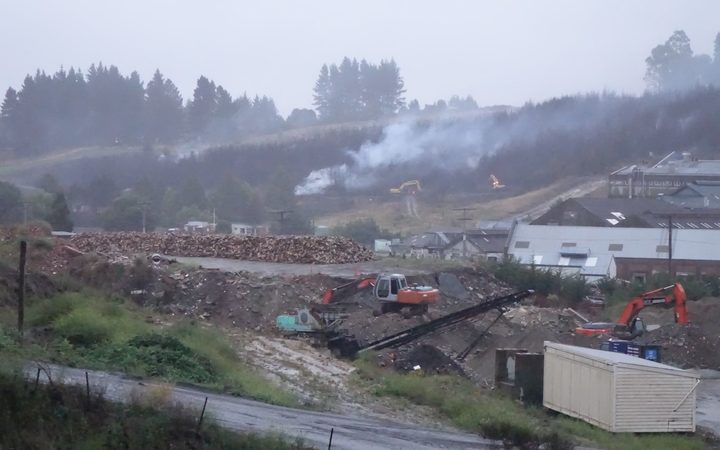 The smouldering fire in the Dunedin suburb of Burnside. Photo: RNZ / Ian Telfer

Flames up to 30m high swept through parched vegetation and hundreds of tonnes of logs at a timber yard, and spot fires started crossing a motorway and put houses at risk. Residents of 100 households were told told to leave their homes.

Fire and Emergency New Zealand said the fire appeared to be contained and the 8mm of rain that fell overnight helped crews enormously.

Excavators were used to create a firebreak on the western flank of the fire, and crews patrolled the nearby residential area through the night to prevent flare ups.

Witnesses said the fire began on a hill near Mount Grand and swept through the dry vegetation in a matter of minutes.

But incident controller Phil Marsh said the cause hadn't yet been determined and two investigators would arrive on the scene today.

Chris Hawker of Civil Defence Otago said residents will be allowed back into their homes from this morning.

A British tourist on holiday in Dunedin, John, said at its peak thick black smoke from the fire obscured any view of the hills.

"Now it's pretty much under control, but before ... the whole valley was black. You didn't see any of the mountains on the other side."

One of those evacuated, John Clarke, said he only found out about the fire when his neighbour knocked on his door and told him to get to a welfare centre in St Clair.

Residents evacuated due to the Burnside fire are not to return home tonight. The situation will be reassessed at 8am.

Three industrial buildings were seriously damaged in the fire, one of which was a lumber yard, which contained a large amount of dry wood.

As that wood caught alight it sent embers flying into nearby residential properties, which prompted the evacuation.

There were no injuries to residents or firefighting staff, and the only residential property damaged was a small shed in a back yard. 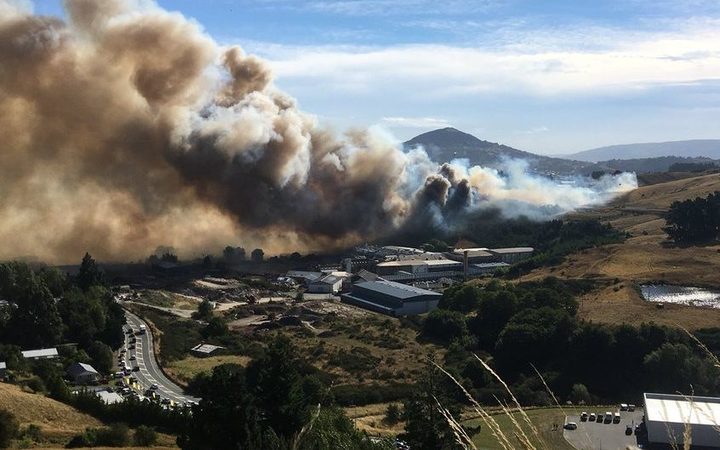 Lumber yard owner Peter Chalmers said the fire caused hundreds of thousands of dollars in damage to his business which specialises in macrocarpa timber and firewood.

Mr Marsh said at the height of the blaze up to 100 firefighters, six helicopters and 25 fire trucks were at the scene. He said it would have been dangerous to have any more helicopters in that airspace at one time.

Dunedin hit a high of 34°C yesterday, and powerful wind gusts accentuated the problem, according to Douglas Chamption, an IT worker who watched it unfold.

He said that dry heat and strong winds played a big part in its spread.

"It seemed to start with that it was just going to stay isolated, but with the massive amounts of wind blowing across the valley it looks like that caused more fires to start burning through the middle of the valley."

Another local, Ruben Morison, heard loud bangs, which were later revealed to be drums of tar exploding due to the heat.

A welfare centre was set up at the Saint Clair golf course, which was managed by Paul Allen from Civil Defence.

Most of those displaced were put up in motels for the night by the city council.