A rare so-called super blue blood moon is set to light up the night sky - but most of the country is unlikely to see it. 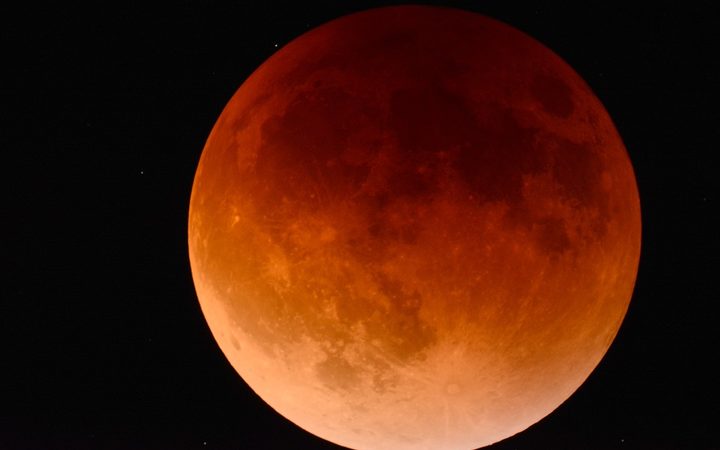 In the last few months, budding astronomers have been treated to a wolf moon, a blood moon, and now a rare super blue blood moon.

During a supermoon, the moon is 14 percent brighter and 30 percent larger than usual, with a reddish tint.

The term 'supermoon' is thought to have been coined by astrologists but is now used primarily by the media to describe a full moon at its closest orbital point to the Earth - known as perigee. The moon's orbit is not round, but elliptical, which means its distance from the Earth varies.

Today's #MoonCrushMonday is in honor of the lunar eclipse on Wednesday, when the Moon will turn red as it enters @NASAEarth's shadow. This composite photo shows a lunar eclipse from 2014. https://t.co/r9IwVW4fm8 #MCM pic.twitter.com/qdMf8JwafF

As the shape of the moon's orbit changes over time due to gravitational influence of the Sun and other bodies, the extreme points on the orbit, the farthest or closest points, happen on a predictable basis.

Those small relative changes in the moon's distance from the Sun cannot be readily distinguished by the human eye.

If you manage to catch a glimpse of the supermoon tonight send us your pics: iwitness@radionz.co.nz

It is expected to start taking place about 1am on Thursday, 1 February, and will last till about 4am.

Although, while most of the world will be able to call the event a super blue blood moon, New Zealand and other Pacific time zones miss out on the blue moon qualifier because of the event's falling on 1 February.

According to NASA, the moon is the third in a series of supermoons and it is also the second full moon of the month, known as a 'blue moon'.

The 'super blue moon' will pass through Earth's shadow giving it a reddish tint, also known as a 'blood moon'. The reddish tint is caused by light being bent in the atmosphere.

Blue moons happen about every two-and-a-half years, Nasa says. And, it coincides with a total lunar eclipse, with the totality viewable from western North America across the Pacific to eastern Asia.

About twice a year, a full moon's orbit lines up perfectly with the Earth and Sun, and the Earth's shadow blocks the sunlight that normally reflects off the moon.

Noah Petro, a research scientist from NASA's Goddard Space Flight Center, said the supermoon tonight was the one to observe.

However, MetService forecaster Mads Naeraa-Speirs said the South Island is set for stormy weather, which may obscure the moon.

"There's a very significant low on the way, coming down from the tropics. It's got a lot of wind, and a lot of rain, and a lot of cloud with it," he said.

He added that clear conditions in Gisborne, Hawke's Bay, Wairarapa, Wellington, Kapiti and Whanganui should give stargazers the best chance of catching a glimpse of the rare event.

Claire Bretherton of the Carter Observatory in Wellington said it's worth staying up to watch.

"It's really well-positioned so that we can see the whole thing here in New Zealand."

She said it will start shortly before midnight but we won't be able to notice anything until 12.50am when the moon starts to move into the darker part of the Earth's shadow.

"It will look like there's a bite taken out of the bottom right-hand corner of the moon, which will gradually spread across the moon until the whole moon is in the main part of the Earth's shadow, this is what we call totality."

Ms Bretherton said you don't need to be anywhere particularly special, as long as you can the see the moon, you can see the eclipse from anywhere on the right side of the Earth.

The next supermoon is expected to appear in 2021.