Residents in an Auckland suburb are frustrated that a heap of illegally dumped rubbish keeps growing by the day. 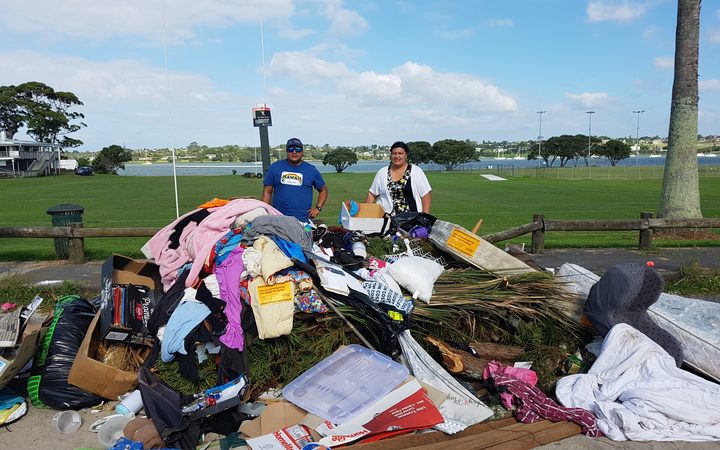 And it's not small items either - car seats, mattresses and even trees are being tossed at the site in Mt Wellington.

Josephine Bartley, who is standing as a Labour candidate in the local by-election, said she was so shocked when she drove past the site she livestreamed it on Facebook.

She said it prompted many others to share their frustrations.

"People are quite emotional and angry about illegally dumping which is good to see, so it's up to about 15,000 views last time I looked."

She said it was common to find smaller amounts of rubbish dumped in the waterway, but this was the biggest pile she has seen in the area - and it keeps growing.

"Unfortunately it's been added to. Somebody's come down here, gone through it, and then other people have come and just added to the pile."

She said the Auckland Council has been made aware of the dumping and she was hoping an investigation started shortly.

"Now I just really need them to get onto the investigation because we have some ideas of who it could be."

Ms Bartley said the unwitting rubbish dumpers had left mail among the rubbish, which clearly states their names and home addresses.

Andrew Va'a, the General Manager of the Marist Old Boys Rugby Club, and was upset to see the site when he arrived at work on Monday.

"Obviously we take a lot of pride in trying to maintain and keep this as a beautiful venue for our community to use. So it's quite disheartening to see that someone would treat it in such a way."

Another local resident - who did not want to be named - said he thought the rubbish was dumped in the early hours of Sunday morning.

"We've stayed here for probably just under 10 months and it's probably the first time I've seen someone illegally dump rubbish like that, so it's not acceptable."

A woman who lives nearby said said she hoped the tip was gone soon.

"It's disgusting and you know, I pick up rubbish myself when I go for a walk and that really does annoy me."

There have been reports of an increasing amount of rubbish at other sites in Auckland, including Maraetai Beach.

RNZ has approached the council for comment on the increasing number of illegal dumping sites.