The sweltering hot weather has brought swarms of jellyfish and similar creatures into New Zealand waters. 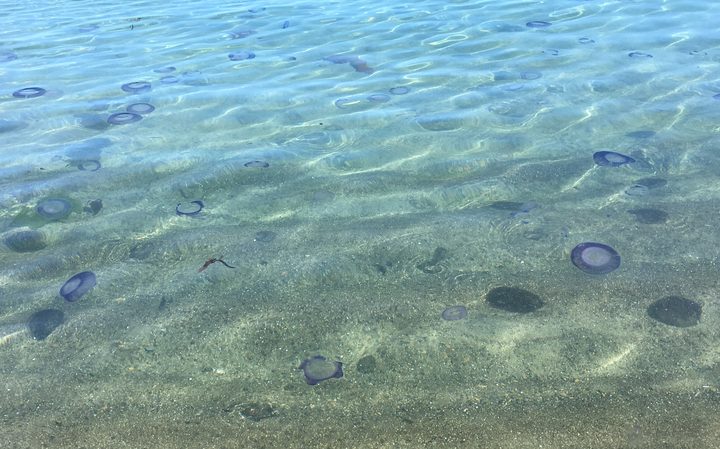 Swimmers have reported dense swarms of creatures rubbing against their bodies as they move through the water.

Have you had any problems with jellyfish while swimming at the beach? Send your accounts or pictures to: iwitness@radionz.co.nz

Dennis Gordon, who is a marine authority at the National Institute of Water and Atmospheric Research, or NIWA, said many were not real jellyfish but a related species known as salps, which was harmless.

Another species was also harmless - though larger - the 30 centimetre diameter Crystal Jellyfish.

Despite its name, it was not a real jellyfish.

But there was also the Lion's Mane jellyfish, which was red, and has poisonous tentacles several metres long.

Dr Gordon said the species was affected by the weather.

Dr Gordon said numbers of jellyfish varied depending on tides and currents as well as temperatures.

Swimming today at #OrientalBay? Notice thousands of barrel-like transparent critters? These are #salps, herbivorous zooplankton that feed on phytoplankton (& don’t sting!) and are important for marine ecology and biogeochemistry @niwa_nz #UCMsalps pic.twitter.com/UHQmZN9fzJ

Wellington surfer Nick Butcher had an unpleasant encounter with such a fish during an ocean swim off Oriental Bay in Wellington Harbour.

"I was just swimming along, as you do, and then splat - face first into what we call 'the mothership of jellyfish'. It kind of freaked me out and it stung me quite a bit.

"It was definitely a face plunge into it ... and then the sting occurred and I was like,'oh, great'," he said.

Mr Butcher said the sting lasted for two hours but left no mark.

A man who was snorkeling off the northern end of Kapiti Island said he swum through a school of what looked like pink coloured jellyfish.

Steve Woodcock said he was only in the water for a minute and when he returned to the boat he was in agony.

He said he was in pain for the next couple of hours describing it as being similar to wasp stings. Mr Woodcock said the symptoms gradually subsided.

The kaitiaki of the beach, Conway Matthews, was on guard this morning when he was advised that a swarm had come through.

"One of the other locals came through and he said he had been stung and there were massive jellyfish in the water."

Mr Matthews said the council decided not to close the beach but told him to let people know about the danger before they went swimming.

Initially, people got out of the sea, but went back in later, believing the stingers had moved on and saying they wanted to escape the searing 28-degree heat.

Porirua City Council was investigating and had taken a picture of a stranded jellyfish, which had been sent for analysis.