A life-size replica of the fossil of an ancient giant penguin found near Kawhia 12 years ago has been donated to the group that discovered it. 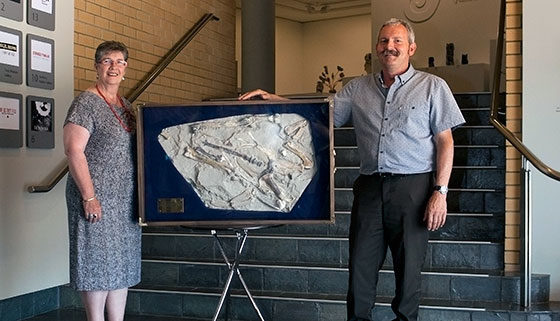 The fossilised remains, estimated to be between 27-34 million-years-old, are now held in the Waikato Museum in Hamilton.

It was found in 2006 by the Hamilton Junior Naturalist Club and was given to the museum for safekeeping and research.

Preliminary analysis of the fossil suggests the giant penguin may have reached 1.5 metres in height and weighed as much as 100kg.

By comparison, an emperor penguin stands at 115 centimetres and weighs 30kg.

In recognition of the club donating the fossil, the museum produced a three-dimensional, life-sized replica.

The President of the Friends of Waikato Museum Alison Gibb said the fossil was an important addition to the museum's science collection.

"We are pleased to be able to acknowledge the Hamilton Junior Naturalist Club's miraculous discovery and be a part of this remarkable story."

"We hope it will inspire more young people to join our club to extend their scientific knowledge."