Bones from a prehistoric burrowing bat, three times the size of those currently living in New Zealand, has been found in Central Otago. 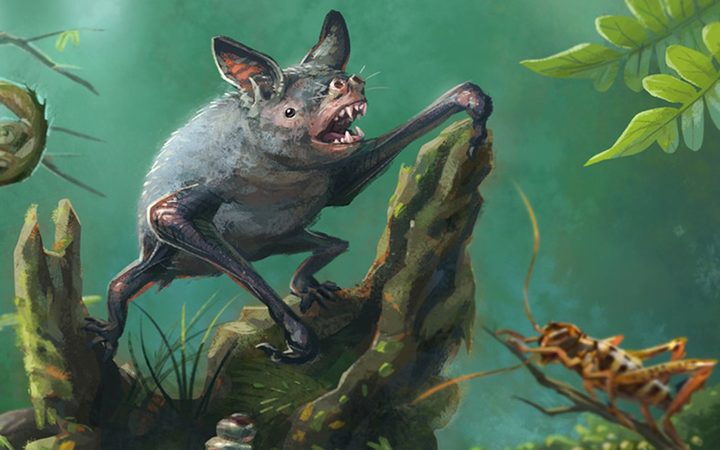 Teeth and bones of the extinct bat has been found near the town of St Bathans in Central Otago in sediment between 16 and 19 million years old.

The study, led by University of New South Wales and other researchers from Australia, New Zealand, the UK and the US, is published in the journal Scientific Reports.

Weighing in at 40g, the bat named Vulcanops JennyWorthyae, is around three times the size of bats currently living in New Zealand.

It was named after research team member Jenny Worthy, who found the fossils and after Volcan, the mythological god of fire and volcanos. It's also a nod to St Bathans historic Vulcan Hotel.

Study co-author Paul Schofield, from Canterbury Museum, said a full specimen of Vulcanops JennyWorthae was yet to be found, but the teeth have indicated the type of diet it would have eaten was closer to bats currently living in South America, rather than those residing in New Zealand.

He said the bat would have lived in the Miocene era, when New Zealand's climate was was sub-tropical and even tropical in some places.

"At the end of the Miocene period the temperature declined rapidly until we got the period popularly known as the ice ages.

'We're hypothesising [this] is responsible for the loss of species such as this bat, and also other things that have been found in the same fossil deposit," he said.

Check out a 3D model skeleton of the nearest relative of Vulcanops, the New Zealand endemic short-tailed bat:

Professor Schofield said they have been working at the fossil site for 17 years and among the discoveries found was a crocodile up to 3m long, tropical bird's such as flamingos, species of terrestrial turtles and a waddling mouse-type mammal.

The most recent discovery was significant to the understanding of the prehistory of New Zealand, he said.

"It gives us a glimpse of what the forests of New Zealand were like around 20 million years ago."

He said the extinction at the end of the Miocene meant caused New Zealand to go back to being essentially birds and giant insects only.

The lesser short-tailed bat is the only species of burrowing bat that remains in New Zealand. The greater short tailed species was last seen in 1967 and is thought to be extinct.

"It's not entirely clear whether or not the species really is extinct, hopefully we hear some good news from [the Department of Conversation] one day about that," Prof Schofield said.

The bat fossils are currently located in New South Wales for the study, but the bones and teeth will be returned to New Zealand and shared between Canterbury Museum and Te Papa.