Heavy rain is putting a dampener on Boxing Day across much of the North Island. 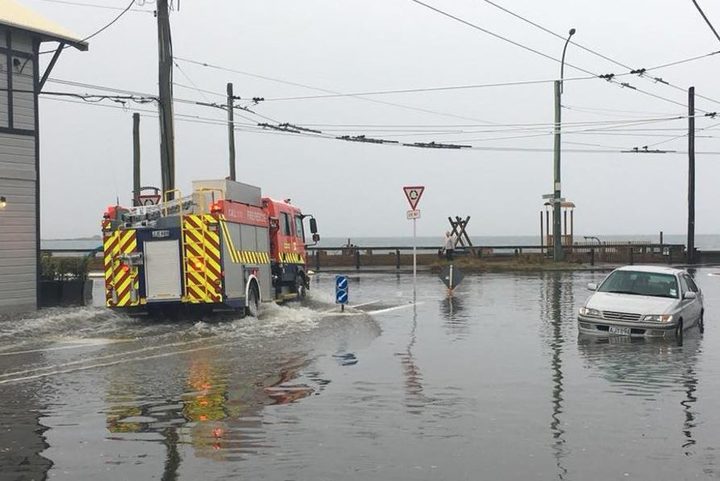 A photo sent into MetService by Jim Burns of Lyall Bay in Wellington today. Photo: MetService

A band of rain moving through is dumping rain on Wellington, the Kapiti Coast, and New Plymouth.

MetService meteorologist Tom Adams said the rain will would be brief but, heavy.

Thanks to Jim Burns for this photo of Lyall Bay in Wellington today. Sudden rainfall after a dry spell runs quickly off the dry ground, and often drains can be blocked with leaves so surface flooding like this is possible. Send your photos in to @MetService ^TA pic.twitter.com/qa1UnmCGmC

In Wellington more rain fell in one hour, than it did in the past 48 days.

MetService said 15.8 millimetres of rain fell at Wellington Airport in an hour, as a front brought brief, but heavy rain into the city.

15.8mm of rain at Wellington airport in the last hour. That's more than the last 48 days added together (since 5am 7th November). ^TA

The rain also caused surface flooding, which lead to fire and emergency getting about a dozen calls.

Fire and Emergency Service spokesman David Meikle said water had come in through shop doors, and in some cases through guttering on roofs.

INCOMING!
Front about to reach the North Island. Brief rain, but heavy for some, for all of North Island today. Wellington, Kapiti + Bay of Plenty ranges under a heavy rain watch https://t.co/bcFLKY4OUU ^TA pic.twitter.com/An8WyB82Nc

He said Bay of Plenty would also get heavy rain as the front moves up the country.

Showers were falling in Auckland and Northland, and the upper North Island could expect thunderstorms later today.

Mr Adams said once the front goes through it would be followed by a southerly, but things should clear up in places in the afternoon once the rain cleared.

MetService tweeted that Christchurch had its hottest Christmas on record yesterday.

Hottest Christmas on record in Christchurch. Yesterday MetService recorded 30.9C at the airport, beating the previous Christmas record of 29.6C (1979), in records going back to 1954. ^TA

Meanwhile, a low is expected to develop east of New Zealand on Wednesday, then deepen on Thursday before moving away late on Friday.

This low will likely bring some rain or showers to eastern areas from Wellington to Gisborne, along with a period of strong to gale force south to southwest winds. However, at this stage both the wind strength and rainfall amounts look to fall short of warning criteria.