Auckland Council looks set to confirm its preferred option for a $150 million America's Cup Village, and strike-out one favoured by the government as too costly and difficult. 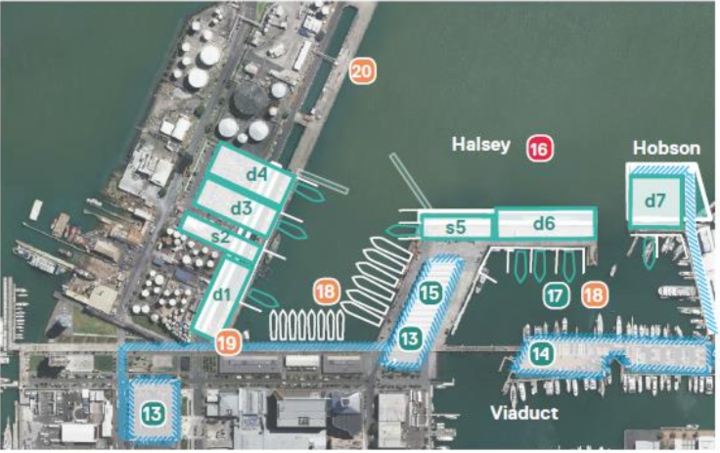 The layout which the government wanted explored was deemed too costly, too small, and not doable Photo: Supplied / Auckland Council

The council meets this morning with officials backing the previously-favoured compromise plan to extend the Hobson, Halsey Street and Wynyard wharves.

The agenda report is available here.

The government preferred fewer wharf extensions, but council officials said that plan to use large parts of Wynyard Wharf would have cost $100 million, if even possible, which they doubted.

Leases for some bulk fuel storage would have to be shortened, businesses relocated at a cost of $100 million, and the use of an open carpark for bases was deemed unworkable.

The council last month all-but rejected that plan, but agreed to explore it further seeing it had been suggested by the Economic Development Minister David Parker.

The cup defender Team New Zealand had lobbied hard for a more expensive plan to further extend Halsey Street wharf to create a stadium effect, but that council rejected that last month as too intrusive.

The council official's preferred design would push Halsey Street wharf out by 74 metres, something which the lobby group Stop Stealing Our Harbour is unhappy about.

The council is keen to move ahead, wanting to lodge a resource consent application by mid-January.

In a briefing paper to Mr Parker the council has advised it won't have the resources to continue exploring a second option.

The wider discussion between the council, the team and the government, on sharing the costs for the infrastructure and for running the event, is expected to run into early next year.