Police have confirmed they will not lay charges over the collapse of the CTV building in the Christchurch earthquake more than six years ago, saying there is not enough evidence. 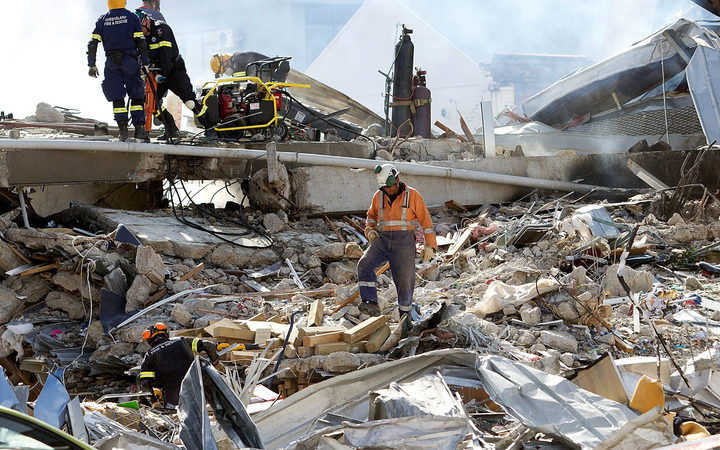 Rescuers search through the ruins of the collapsed CTV building Photo: AFP

Police officially announced the outcome of their investigation into the collapse of the CTV building this afternoon.

The building collapsed following the 6.3 magnitude earthquake on 22 February 2011 which devastated much of the city and killed 185 people.

The Canterbury Television office collapsed in seconds and, in combination with a fire soon after, led to 115 of the deaths.

Police have been conducting an investigation into whether criminal charges can be laid following the collapse since December 2014. They completed their investigation into the deaths last year and referred the file to Crown Law in June.

"After very careful consideration the evidence is not sufficient to provide a reasonable prospect of conviction."

"The police recommendation was to prosecute. Following appropriate legal advice and lengthy discussion we all came to the conclusion that we hadn't met the standard of evidential sufficiency that we needed to."

He said the length of time between people's actions and the building's collapse was also a barrier to prosecution.

Police were "acutely aware" of how disappointed people - especially the families and friends of victims - would be with the decision.

"We've done everything we possibly could. We have to deal with the facts we're presented with."

A number of documents would be released about the evidence considered, experts used and information police received, he said.

He said the investigation cost $1.8 million and was the biggest of its type ever held in New Zealand.

"It is my belief we could not have done any more than we have done. This was not a simple investigation, 115 lives were lost [and] that's why we mounted this investigation."

An Earthquakes Royal Commission found in 2012 that the building - designed by Dr Alan Reay's company - should not have been issued a building permit and the design was deficient in several ways.

It said the building was given a green sticker after the September 2010 earthquake, even though an engineer had not assessed it.

Mr Reay and the building's designer, David Harding, both resigned from IPENZ (now called Engineering New Zealand) before it could process complaints laid against them by victims' families and the chief engineer from MBIE.

The engineers' professional body has since changed its membership requirements, and revised its rules so members cannot resign to avoid a complaint. The complaints process was also changed.

Earlier today, Mary Anne Jackson, a receptionist who survived the collapse, told RNZ she had been informed no criminal charges would be laid.

She said she felt absolutely "gutted", but it did not mean the families of the victims were giving up.

'In a way I'm glad this is over' - family of victim

Tim Elms, whose daughter Teresa McLean was among the CTV victims, said he was disappointed but not surprised by the police decision.

Speaking to RNZ by the CTV site in central Christchurch, Mr Elms said police were also disappointed by the outcome.

He said he was called by Detective Superintendent Peter Read with the decision this morning.

Mr Elms said he understood that the Crown's legal advice was that getting a conviction was unlikely.

Legal advice the families have received also indicated a conviction would be difficult, he said.

"In a way I'm glad this is over. This is another part of what's been a tough seven years, a major part of it's over.

"People always say 'you'll get closure' but you don't."

Mr Elms said his daughter was one of life's real triers.

At the time of her death she had two young sons and he said she was exactly where she wanted to be in her life.

"She had a new house in Kaiapoi, everything was going lovely for her. She had the job here, and then bang, it was all over."