A speech made by former National MP Maurice Williamson in 2013 has now become a battle cry for marriage equality among Japanese social media users. 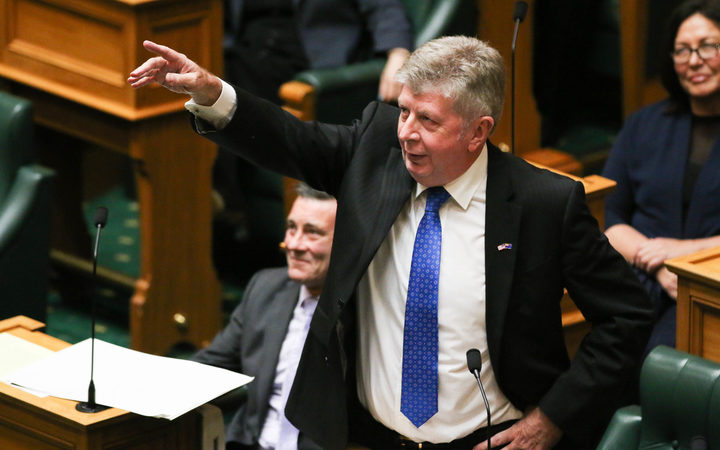 National's Maurice Williamson points to his wife in the gallery during his valedictory statement to the House. Photo: VNP / Daniela Maoate-Cox

Mr Williamson's speech in Parliament in April 2013 in support of the same-sex marriage bill - in which he joked about claims of a gay onslaught and an enormous gay rainbow over his electorate has already been viewed millions of times online.

Mr Williamson's speech prompted an invitation for him to appear on The Ellen DeGeneres show in the United States, although he was unable to take up the invitation.

The speech has now gone viral in Japan after it was reposted on Twitter last week.

Some cities in Japan recognise gay partnerships, but same-sex marriage remains illegal in the country.

Footage of the speech resurfaced in response to recent comments made by Wataru Takeshita, the General Council Chairman of Japan's Liberal Democratic Party.

Mr Takeshita has been criticised this week for suggesting that gay partners of state guests should not be allowed to dine with the Emperor or Empress of Japan. He later apologised for his remarks.

One Twitter user posted part of Mr Williamson's speech with Japanese subtitles and described how it was, "a speech that was admired worldwide at that time." He dedicated it to "young people who haven't heard it."

In his speech, Mr Williamson - who is now New Zealand's Consul-General to the US - said: "All we are doing with this bill is allowing two people who love each other to have that love recognised by way of marriage. That is all we are doing."

"I give a promise to those people who are opposed to this bill right now. The sun will still rise tomorrow.

"Your teenager daughter will still argue back with you as if she knows everything. Your mortgage will not grow," he continued.

"You will not have skin diseases or rashes, or toads in your bed, the world will just carry on. So don't make this into a big deal."

Following the speech New Zealand's parliament legalised same-sex marriage. It was the first country in the Asia-Pacific region to do so.

The post of Williamson's monologue has now been retweeted almost 173,000 times, liked more than 300,000 times and generated hundreds of comments.

One Japanese Twitter user commented: "It is a wonderful speech! Thank you."

Another posted: "We need this kind of person in Japan. Someone who stands up for love."

"I wonder if the day will come when such a wonderful speech can be heard in Japan," read another tweet.

Mr Williamson has also responded on Twitter to his new found fame with both bemusement and delight:

I am so happy to see such a huge increase in the number of new followers in the last few hours - many of them coming from Japan. I don’t know what’s driving it but I’m delighted. For the record: My oldest son Simon Kenya is half Japanese so I’m proud of the association. Welcome.

He continues to receive messages of thanks from his new Japanese fan base:

Hi from Japan, I happened to watch your speech and I’m so thankful for this luck. I am not gay but your speech changed the way I see the world completely✨I started to think more abt ppl struggling to live their lives just the way they are even today. Thank you.