A Māori woman standing in a Whangarei council by-election has complained to police about the systematic destruction of her billboards. 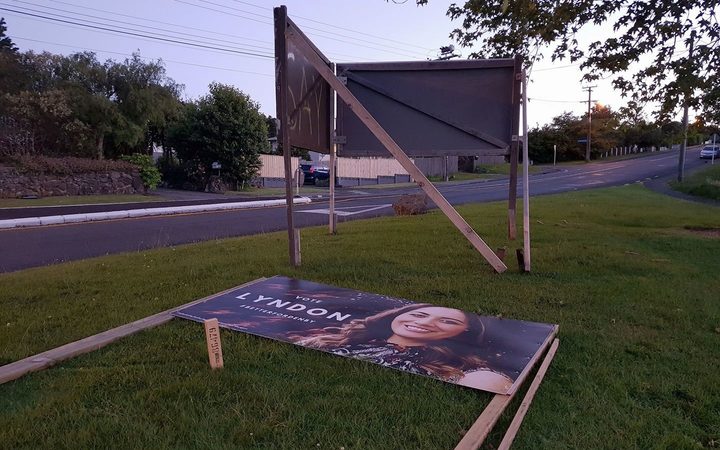 One of the vandalised billboards. Photo: Supplied

Huhana Lyndon has had nine billboards knocked over in the past week - four of them at the weekend, in Kamo.

Ms Lyndon said no-one else's billboards had been attacked and she couldn't help feeling she was being personally targeted.

She believed the vandalism might be linked to her recent unsuccessful campaign for Māori wards in Whangarei District Council.

Ms Lyndon, who is Ngāti Wai and Ngāpuhi, said it was important for northern Māori to play a part in local governance because they were the guardians of the Treaty of Waitangi and the Declaration of Independence.

There are no Māori councillors on the Whangarei District Council, despite Māori making up 30 percent of the community.

Ms Lyndon said she hoped the attacks weren't because hers was the only woman's face on a billboard, or because she's Māori.

"I'm really sad and hurt, because where is the fairness?"

Ms Lyndon said people opposed to Māori wards promoted the one-man, one-vote system and she was standing for council on that basis.

"When you see your billboards being smashed, you wonder why you're being hit when others - primarily men - are not."

Ms Lyndon said she was grateful to friends and whānau who were continually being called out to repair and re-erect her billboards.

She is one of 17 candidates running for the Denby ward, which became available when Jayne Golightly resigned as a councillor following her discovery she was not a New Zealand citizen.