The Battle of Beersheba, which was part of the Third Battle of Gaza was fought in Palestine in October 1917, 100 years ago today. 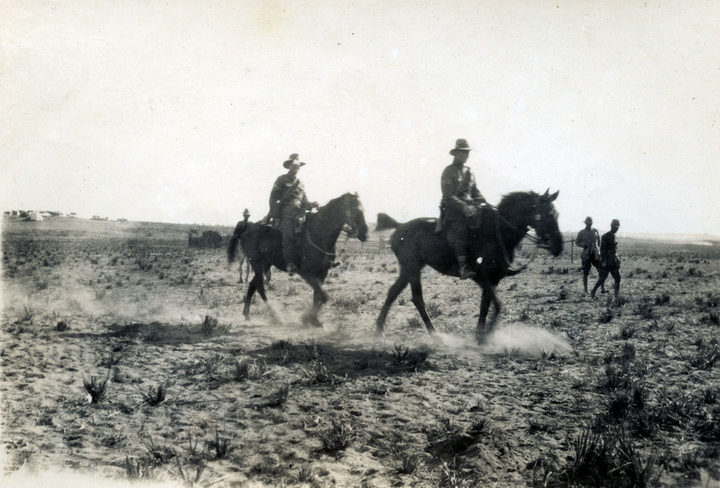 The Australian troops said New Zealand had some of the best horse soldiers in the whole campaign. Photo: Supplied / Wairarapa Archive, 06-78/5-1

The Sinai-Palestine campaign lasted from 1916 to 1918 and is described by Massey University War Studies Professor Glyn Harper as the forgotten campaign of the war.

"Gallipoli and then the battles of the Western Front cast a fairly large shadow leaving Sinai-Palestine largely forgotten."

While casualty figures for the desert were relatively light compared to the Western Front many New Zealand soldiers paid the ultimate sacrifice.

In his book, Johnny Enzed, the New Zealand soldier in the First World War, Glyn Harper wrote: "The Sinai-Palestine campaign was little more than a side-show to the main theatre of war in France and Belgium. It was a place where hopes ran high for a cheap, easy victory over an enemy not highly regarded by the Allied leaders. Such hopes were to be cruelly dashed, as the war here dragged on and experienced an equal share of disasters before victory was finally achieved."

During the Sinai-Palestine campaign, New Zealanders served as mounted rifles, engineers, gunners, and cameliers. Pacific people served as members of the Rarotongan Company of the New Zealand Pioneer Battalion. 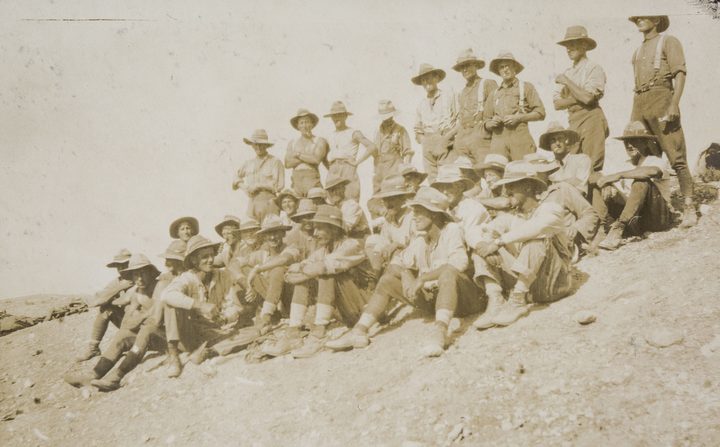 The town of Beersheba was considered the key to taking the fortress town of Gaza, which was an important stronghold held by the Turkish forces.

An attempt was made by allied forces in March and the New Zealand Mounted Rifles Brigade did in fact enter the town, but the British commander pulled them out.

A second attempt came in April, which Professor Glyn Harper said was a major disaster.

"It was one of the most expensive battles of the whole theatre."

He said six months later, British General, Sir Edmund Allenby drew up a plan which he was determined was going to be the final battle to gain Gaza.

The New Zealand responsibility was to capture the heavily fortified hill of Tel el Saba (now known as Tel Beer Sheva), a prominent spot overlooking the town of 40,000 people.

Glyn Harper said it was a text-book attack - a cavalry charge with bayonets drawn.

The New Zealanders took the hill late into the afternoon of 31 October and this paved the way for an all-out attack on Gaza.

This challenge was taken up by the Australian Light Horse Brigade which attacked the town in a full cavalry charge and captured it before dark.

This dramatic and famous action has gone down in Australian military history, Professor Harper said.

Eight New Zealand troops died at Beersheba and 26 were wounded.

While the battle was successful, the fighting did not stop as the allied mounted troops pursued the retreating Turks.

It is in this that New Zealand suffered its worst day of the whole campaign.

An impromptu attack was made on a heavily defended Turkish position on 11 November.

Professor Harper said it was the bloodiest day of the whole Sinai-Palestine campaign.

The Australian troops were impressed by their New Zealand counterparts describing them as some of the best horse soldiers in the whole campaign.

Conditions in the Middle East were very difficult, with harsh terrain and heat and sand.

During the push to drive Ottoman forces from the Sinai and Palestine the troops suffered from extreme temperatures, recurring sickness and a chronic lack of fresh water.

While the allies had achieved their main objective to push the enemy well away from the Suez Canal, the campaign was far from over.

In late 1917, the allies took Jerusalem, which Professor Harper said was described by British Prime Minister David Lloyd George as a Christmas present for the British people.

The Turks resistance finally gave way, but not until October 1918.

It was just 25-years later that New Zealand soldiers were back in the Middle East fighting at the Battle of El Alamein in Egypt in World War II. The 75th anniversary of that battle was celebrated last week.

New Zealand will mark its involvement in the Battle of Beersheba and the Sinai-Palestine campaign over the next few days.

A 30-member New Zealand Defence Force contingent which is in Israel for the commemoration includes Chief of Army Major General Peter Kelly representing the Chief of Defence Force, ceremonial personnel, who will parade the Guidon of the Queen Alexandra's Mounted Rifles (which bears Sinai-Palestine battle honours), a Māori Cultural Group and musicians.

They will be joined by NZDF personnel serving in the United Nations Truce Supervision Organisation (UNTSO) and in the Multinational Force and Observers (MFO).

This evening New Zealand time, a joint New Zealand and Australian service will be held at Beersheba War Cemetery. It will be followed by the New Zealand National Service a few hours later at Tel Beer Sheva.

On Thursday, the New Zealand Defence Force will hold services at Ramleh War Cemetery in Ramla and at the Jerusalem War Cemetery on Mount Scopus.

New Zealand will be represented by the Governor General Dame Patsy Reddy.

Services in this country today will include the National Commemoration at Pukeahu National War Memorial Park in Wellington at 11am.

There will also be commemorations at Auckland Grammar School to honour old boys who fought and died at Beersheba and a tree planting at Sir Douglas Bader Intermediate School in Auckland.