Innocent people will continue to die unless police change their pursuit policy after three people died in crashes in Auckland in a fortnight, a road safety campaigner says. 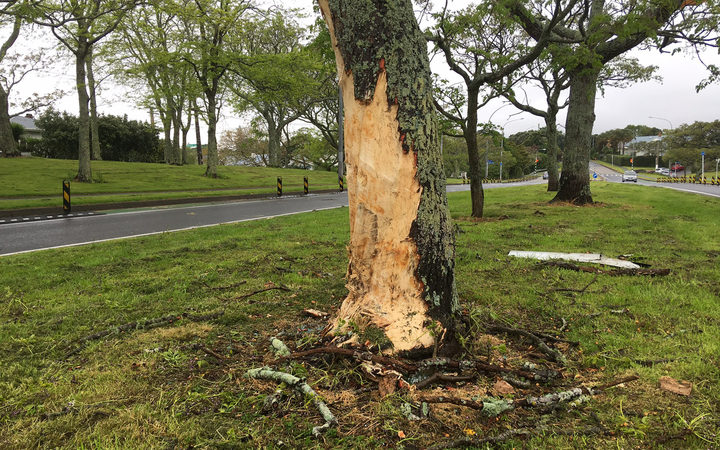 Two people have died after a car crashed into a tree on St Lukes Road on the weekend after trying to overtake another vehicle during a police pursuit. Photo: RNZ / Kate Newton

A 25-year-old woman and a 29-year-old man died in Auckland yesterday when their car crashed into a tree during a police pursuit.

Three other men, including the 22-year-old driver, were seriously injured when the vehicle they were in crashed into a tree on St Lukes Road in Morningside.

Police said the car had been travelling at up to 130km/h and the pursuit lasted less than five minutes.

It comes after the death of 15 year old Morrocco Tai during a police chase two weeks ago.

Five people died on the roads over Labour weekend, compared to three last year and five again in 2015.

In the last 12 months, 376 people have died on New Zealand's roads, 51 more than over the same period last year.

He told Morning Report it was pointless for police to just lecture young offenders on the risks of fleeing them as they were often running on adrenaline and not thinking of the consequences.

"Let's talk about the real world because nice theories and lectures don't save lives but changes of policies do.

"Between 2000 and 2011 there were 19 deaths associated with police chases in Queensland in Australia.

"Since restrictions on police pursuit were put in place six years ago there have been no deaths."

He said according to science done by the FBI, best pursuits policy was for police to drop back and then catch them later.

"Because in the majority of cases the driver who is being pursued will calm down and slow down once they don't see the flashing lights anymore. That doesn't mean they get away with it.

"But you've just got to stop this cowboy posse attitude that we must pursue at all costs because it's clearly costing multiple lives and many of the lives are completely innocent people including just bystanders at the side of the road."

He said if changes were not made people would continue to die.

In a statement Assistant Commissioner Road Policing Sandra Venables said it was "up to the driver to take more responsibility and make better decisions".