More than 200 people across the country spent a night sleeping outside on cardboard boxes in an event aimed at raising money for the homeless. 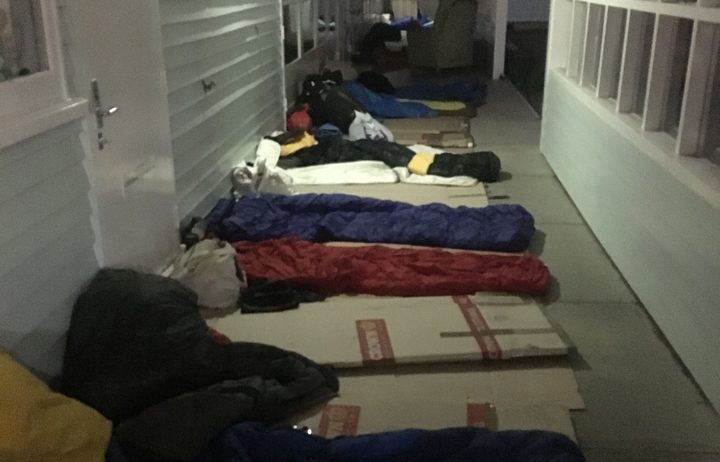 Cardboard boxes and sleeping bags set up on a porch for the 14 Hour Homeless event. Photo: RNZ / Te Aniwa Hurihanganui

The Salvation Army's 14 Hour Homeless event is in its fourth year and this year raised a record more than $70,000.

According to the Salvation Army, one in 100 New Zealanders are classed as housing deprived.

Wellington participant Claire French said the event gave her an opportunity to do something about homelessness.

"It's very easy to turn a blind eye to homelessness when you're not in that position yourself," she said.

"If I walk past them on the street I do feel a real sense of sympathy towards them, but also a real sadness because I don't really know how I can help.

"I think by engaging in a project or event like this, it gives me an opportunity to really give back."

It was important to to raise awareness about the problem that exists in New Zealand, she said.

Money raised from the event - also held in Whangarei, Palmerston North, Auckland, and Invercargill - will fund initiatives by five not-for-profit groups that work with the homeless.

"The pressure on families has worsened over the last 12 months. We continue to see, day in day out, people really struggling to make ends meet and that puts a real pressure on accommodation needs.

"We are full to overflowing and that's not a good place to be - but we do what we can with what we've got."

He said the 14 Hour Homeless event gave people the chance to "stop and put yourselves in somebody else's shoes".

"It can be quite emotional to think about what other people have to go through and the little bit that we can do to help."