New figures show 98 free-market affordable homes have been built under the government's Auckland Housing Accord. 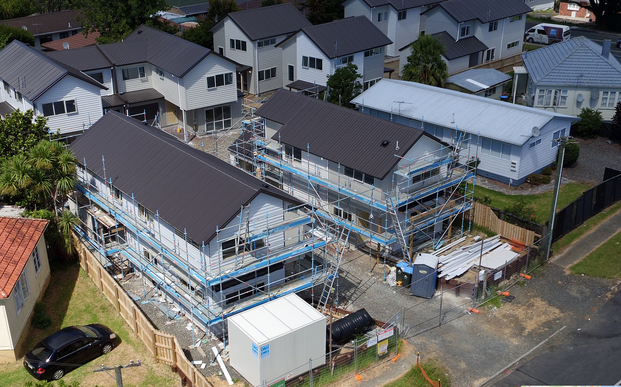 The chair of Auckland Council planning committee, councillor Chris Darby, has called the Accord a "dismal failure" in addressing affordability.

The Housing Accord ran for three years from October 2013, but was then extended by seven months.

It offered fast-track planning to accelerate home construction and improve affordability, and at one point, there was a total of 154 Special Housing Areas (SHA) under the accord.

An analysis by Auckland Council sets out a detailed picture of what the government's SHA legislation has delivered.

Council data shows 3157 homes were completed in SHAs by the end of June, when monitoring ended.

Of these, 580 were categorised as affordable, and were split into two categories.

In the first, there were 482 dwellings classified as "retained affordable"; this is generally social housing and mostly built by either Housing New Zealand with joint venture subsidiary Tamaki Redevelopment Company or the Waimahia development run by the Housing Foundation.

In the second category, free-market 'relative affordable' homes, 98 homes have been built in SHAs, of which 30 were in the government-owned Hobsonville Point development. This category is for homes generally priced below the $650,000 cap set for KiwiSaver assistance to first home buyers to purchase new homes in Auckland.

Some in this category have yet to be built; 106 first-home buyers signed up for them. They include 45 one-bedroom apartments, three studios, and 19 three-bedroom homes.

In addition, 40 'relative affordable' dwellings have been sold, but declarations had not yet been lodged.

The figures were compiled after Mr Darby expressed dissatisfaction with the unclear picture of how the Accord had performed.

His view now is mixed. He said the Housing Accord had been successful in boosting the supply of homes - but not on cost.

"The information on the number of consents shows they are being converted into dwellings. In terms of the key focus of the Housing Accord, on affordability, on that count it's been a dismal failure."

At today's planning committee meeting, Mr Darby intends to call for the council to take up the lead on work on affordability in the city.

Auckland mayor Phil Goff convened his own housing taskforce early this year, but has focused on how to improve supply.

The detailed figures show a big pipeline of construction still ahead, in some cases over coming decades.

There are 16,132 individual sections or dwellings already approved, of which 2006 belong to Housing New Zealand. A further 3116 approvals are in the pipeline.

Apart from the 3157 homes completed at the end of June, another 2504 are under construction.

Affordable homes are also being sold outside Special Housing Areas.

Auckland needs to build an estimated 14,000 homes a year to reel-in a shortage of 40,000 and keep up with growth. Latest council figures show completions in the past year running at 7000.