Analysis - "Your Top Up is successful," reads the bright green font on the Auckland Transport (AT) website. But it's wrong and has been for five years. 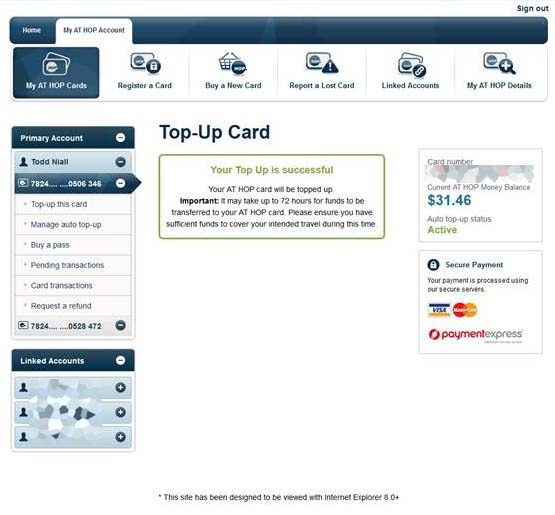 The top-up screen from the AT website. Photo: RNZ

That the council-owned transport agency could misinform its customers for five years is a symptom of a problem wider than this week's anger over $342,000 of top-ups ending up unloaded, and in AT's coffers.

The problem is not the complex technical reasons that AT laid out to explain how the top-ups failed.

It is that AT struggles to understand how its customers experience daily life with the agency.

AT admitted - after a customer blew the whistle - that 14,000 top-ups made on its website had never made it onto customers' cards.

Those who contacted the agency had the process renewed, but AT said it had no way of knowing how much of the $342,000 had been re-instated.

The fault, it said, was customers who had not read the ATHOP small print, the terms and conditions, that explained a card must be used within 60 days of a top-up, or the transaction failed.

It was RNZ that pointed out to AT that the vital piece of information appears nowhere during an online top-up transaction, in which the final message is the triumphant declaration of "success".

The agency conceded that it could add that message, so that customers would know at the moment they loaded the money, that a tag-on within 60 days was still needed.

It's a hard omission to explain, five years into the ongoing rollout of Auckland's $100 million integrated public transport ticketing system.

The ATHOP rollout is one in which simple clear communication with customers has often been missing.

During the October 2012 launch, leaflets distributed were dense, repetitive, and not easy to digest.

Requests for media information could take days because AT said it was bound by legislation, so in order to comply it had to have a lawyer, directors and executives sign off the wording of any statement about ATHOP.

AT called it a success and had sign-up numbers to prove it. But senior executives probably didn't witness the anger, confusion and distress its elderly customers endured at sign-up sessions.

One that I attended at Massey Library in West Auckland was saved only by the intervention of a librarian who lectured AT staff on how to manage queues and ensure those arriving needed to be there and had the required information with them.

AT has not enjoyed the week-long criticism in media and on social media, but its chief financial officer Richard Morris said at least it would have helped customers understand the rules.

AT's customers can only hope that the agency has learned a lesson in the need to provide clear and simple information, at the time and in the place that it's needed.