A group of 100 protesters stormed the Canterbury Regional Council offices today to protest the state of the region's waterways.

They were upset about what they said was declining water quality and the role they believed the council had played in allowing it to degrade. 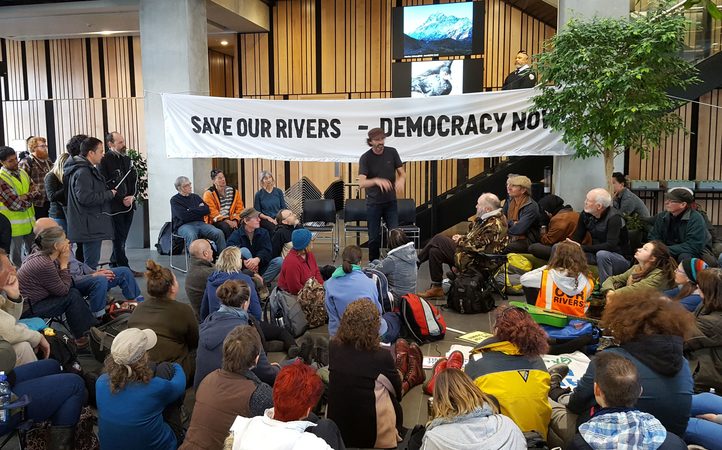 The Greenpeace-organised protest occupied the main foyer of the ECan building in Christchurch, where the demonstrators listened to several speeches.

Freshwater ecologist Mike Joy told the crowd the full impact of dairy farming on the region's waterways had not yet been seen.

Greenpeace spokesperson Gen Toop said she held the government-appointed commissioners at the council responsible for the state of Canterbury's waterways.

"Seven years ago the National-led government sacked the democratically elected councillors here at ECan and since then all we've been given in return is more irrigation, more cows and more polluted rivers.

"Today we're occupying the foyer and we're taking our democracy back and we're standing up for our rivers."

The council is now made up of a mixture of elected councillors and government appointees, but Greenpeace wants to return to a fully elected regional council.

Ms Toop said they planned to stay in the foyer all day, and would refuse to move if asked to.

One of the elected members, acting council chairperson Steve Lowndes, said the protesters were welcome to remain as long as they did not get in the way of people coming and going at the council.

He sympathised with the sentiments they were expressing, but maintained the best way of improving water quality was by working within the current rules.

Mr Lowndes said these rules were changing and now made tougher demands of polluting dairy farmers.