Heritage groups are breathing a sigh of relief after the Anglican Church decided to save the quake-ravaged Christ Church Cathedral. 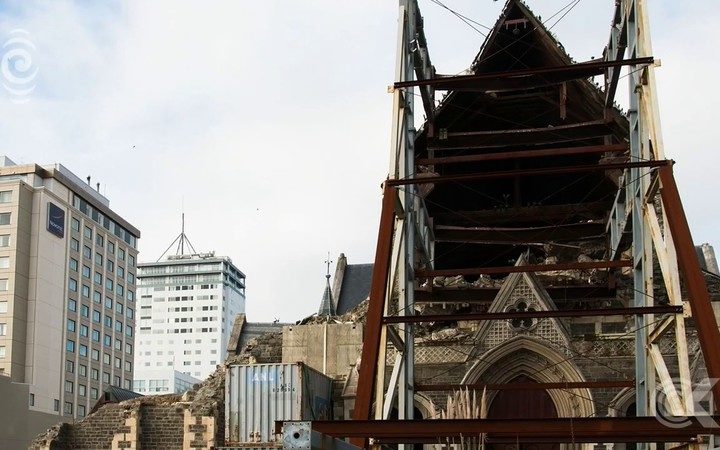 The building's crumbling structure is being held up by metal struts and shipping containers. Photo: RNZ

The Anglican Synod voted to reinstate the cathedral over the weekend, bringing years of indecision and legal threats to an end.

The building has been in ruins since the Christchurch earthquakes almost seven years ago, and its structure is being held up by metal struts and shipping containers. There were three options on the table before the Synod: reinstate, demolish and build something new, or gift the building to the Crown.

Greater Christchurch Building Trust co-chairperson Philip Burdon said his group would have fought to protect the building in court if the Synod had voted for demolition.

"We have now got resolution rather than the ongoing prospect of years of litigation," he said.

The Greater Christchurch Building Trust had pledged $13.5 million towards restoration, and Mr Burdon believed it could raise that much again.

The Church's insurance proceeds, as well as pledges of funding from the government, Christchurch City Council and the Greater Christchurch Building Trust, brought the total amount of funds available for restoration to about $90m.

A full rebuild, to be completed in stages, is estimated to cost about $108 million.

The Anglican Church's financial liability has been capped by the government at its insurance proceeds of about $42 million.

Mr Burdon said the decision to rebuild would let the city move forward. 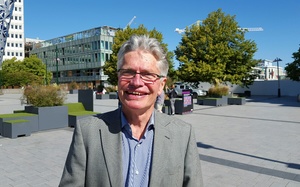 "I am delighted Synod has made this commitment, I only hope now we can unite and get behind the project," he said.

The charity that pushed for restoration, Restore Christchurch Cathedral, believed sanity had prevailed.

Co-chairperson Mark Belton said it would have been impossible for Christchurch to fully recover from the earthquakes without a fully restored cathedral.

"It would have been a tragic, missed opportunity to begin the healing process," he said. "Sanity has prevailed."

Mr Belton said he had been working with engineers since the earthquakes to try to demonstrate that the building could be saved.

"The engineering community right from the start said it would be insane to knock it down," he said. "One hundred engineers signed a statement in 2012 saying it could be restored to its former glory."

Mr Belton said the cathedral had been saved from a near-death sentence.

"People have been watching from all over the world, and after a five year battle, this is the best outcome for everyone."

Christchurch Bishop Victoria Matthews said a rebuild could be completed within a decade.

National's Christchurch rebuild spokesperson Nicky Wagner has committed to workers being on site by Christmas this year.