The fate of the Christ Church Cathedral could be decided this week, with the Anglican Church's synod assembly beginning tonight. 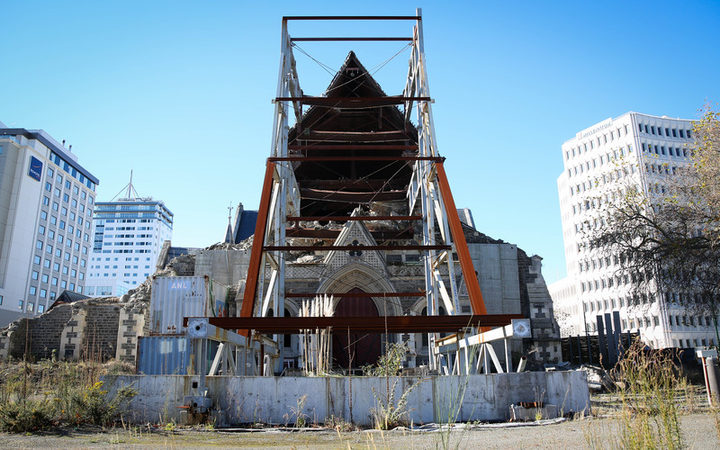 The Christ Church Cathedral has been in ruins since the February 2011 earthquake. Photo: RNZ / Alexander Robertson

The cathedral was badly damaged in the 2010 and 2011 Christchurch earthquakes, and has laid in ruins since.

There have been six long years of legal threats from heritage groups, million-dollar promises from the government and indecision from the Anglican Church.

There are three options on the table: restore the old building, demolish and build something new, or gift the building to the city.

Christchurch Bishop Victoria Mathews has publicly stated her support for demolition, but has faced opposition from heritage groups.

"The reality is that the whole process has to go through a legal entitlement, and there will be a lot people who will certainly oppose any ambition to demolish," he said.

"It will simply be a black hole of legal squabbling for years to come."

The government and the Christchurch City Council have also thrown support behind the restoration of the damaged building.

The government last month pledged $25 million in funding and loans for restoration, with the city council offering another $10m.

This, added to a funding pledge from the Greater Christchurch Building Trust and the church's insurance proceeds, brought the total available funds for restoration to $90m.

A report from a working group, set up by the Anglican Church, put the total cost for restoration at $104m.

The Anglican Church proposed a third option: gifting the cathedral to the city.

But former Christchurch mayor Garry Moore said this option was a cop-out.

He also said if the church opted for demolition, there would be a strong response.

"There would be one hell of an uproar," he said. "Christchurch loves a scrap... and they wouldn't know what hit them."

The Anglican Church declined a request for an interview, so it is unclear how a decision would be made.

Its assembly is expected to begin tonight, and will run until Saturday.