House-hunting beneficiaries in Palmerston North say the rental situation is dire and many people do not know what they can do. 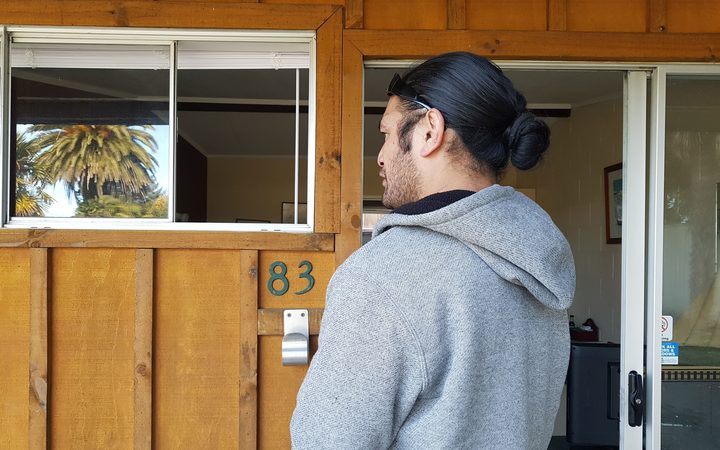 Cory is desperately trying to find a home after staying in a motel for five weeks. Photo: RNZ / Jemma Brackebrush

Labour and National offered their solutions for the city yesterday. Labour wants to build 149 new homes - a mix of starter homes and state houses - while National is planning to build 30 short-stay homes this year and 70 more social houses in the next three years.

Cory is house hunting and trawling through ads every day, but he is on a benefit and says landlords simply do not want him.

"It says on the ad 'professional people' so I put on the white collar and look like that. It's all good until I hand the WINZ paper over and it all goes downhill."

He has been living in a Palmerston North motel for five weeks and moved there because he could no longer afford his $200-a-week board.

Work and Income is footing the bill at $700 a week, which Cory said he would have to pay back.

He has also been forced to turn down job offers because his first priority is to find a house for him and his 15-year-old son.

"It's actually a full-time job trying to look for a house and get accepted. I can't be looking for a permanent address while I'm at work and I can't commit to a job properly because I'm worried about where I'm going to live," he says.

The only surety he had to go by was WINZ extending his emergency housing on a week-by-week basis, he said, which only added to the pressure.

Ministry of Social Development figures show almost 11,500 emergency housing grants have been given out this year, and nationally there are more than 5300 people on the social housing register, waiting for a home.

One man who was recently released from prison lived in a motel for 18 weeks with his two daughters because he could not find a private rental.

"They [Housing New Zealand] won't put you straight into a housing corp house, you've got to go private. And then if you go private the rent is about $500.

The man got a state house two months ago and agrees more are needed. But he questions why there are five empty state homes in his neighbourhood.

Housing New Zealand said that at the end of March this year, it had 35 of 1400 houses vacant in Palmerston North.

It said 13 were either under repair or ready for tenants, while 19 were being decontaminated for meth.

Meanwhile, motelliers like Glenys Black - who owns Pioneer Motel - can be almost booked out with people needing emergency housing.

Numbers spiked in July last year and at some stages 10 of her 13 units were filled with Work and Income people.

She said she was happy to take beneficiaries in genuine need like Cory, but too often it meant drugs and damage.

The police were called in those situations, she said.

Then there was the damage to property.

In one instance there was a broken door, among other damage to one room, but because Ms Black only charged $650 per week for the room, that was all she could claim as a bond back from Work and Income.

The door alone cost $884 to fix, and the rest came out of her pocket.

Other motelliers RNZ spoke to said they would not take referrals from Work and Income.