Destructive winds reaching more than 140km/h in Wellington have damaged buildings, sent trampolines flying and delayed flights at the airport this morning. 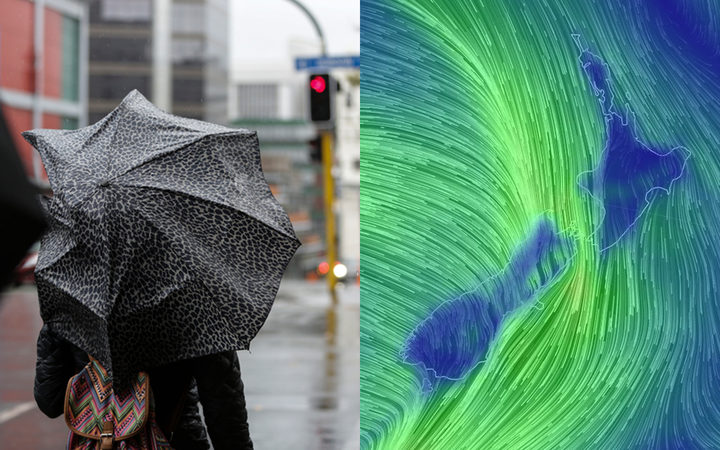 Strong north to north-west winds were forecast for much of central New Zealand. Photo: RNZ / NIWA

A dispatcher at the fire service communications centre said there had been numerous reports of wind damage, including material flying off buildings.

The capital was being lashed by gusts of up to 142 km/h, said MetService.

Mr Dempsey said the hardest hit areas were the CBD and the south coast suburbs of Island Bay and Kilbirnie.

MetService meteorologist April Clark said the highest recorded gust was 142 km/h at Mt Kaukau, while the hill suburbs of Kelburn, Khandallah and Brooklyn were also getting a buffeting.

"We have also had a report of 82 knot gusts in Cook Strait, so it's not only bad here, it's bad out there in the Strait as well. So very windy, even for Wellington, this morning."

Ms Clark said the worst of the gales would be easing in the region early afternoon, and they would take the rain with them.

Wellington Airport has warned of flight delays due to the wind, and said travellers should check that their flights were running to schedule here.

Some Wellington locals have taken to Twitter to warn about the wind:

Wellington! You blew me away this morning. Literally. I landed on the pavement from the wind! #shame

Forget wearing hats in #Wellington today. Gale force winds - have almost been blown off my feet a couple of times. #Wind #WellingtonNZ #Gale

The Wellington wind was the worst I've ever experienced today, I literally almost got blown off my feet

Every gust of wind seems to make my office creak.

MetService said the west of the South Island, Mt Taranaki and the Tararua Range would be hit by rain brought by the front coming off the Tasman Sea, while gales have also been forecast for parts of Canterbury and Marlborough.

The heaviest rainfalls are expected over Fiordland and Westland, the headwaters of the Otago and Canterbury lakes and rivers, the ranges of Buller, and north-west Nelson.

Up to 230mm of rain could fall in Westland over the 24 hours up to tonight, and MetService warned rainfall of this intensity may cause rivers and streams to rise rapidly, and could also result in slips and surface flooding.

Drivers have been warned today's strong gusts may make driving hazardous and cause damage to trees, powerlines and unsecured structures.

NZTA has urged motorists to take extra care today, especially on the Desert Road and the Rimutaka Hill Road.

Hold on2 ur hats (& tie down ur trampolines) #Wellington it's going to be windy this morn.Check Wind Warnings at https://t.co/Sd5C6lrsSL ^AC pic.twitter.com/0e6BJiKWrp

In Wellington, the harbour ferry is operating a restricted timetable this morning and travel to Seatoun has been cancelled because of the conditions.

Meanwhile, State Highway 38, between Wairoa and Urewera National Park, is down to one lane due to a slip caused by heavy rain.